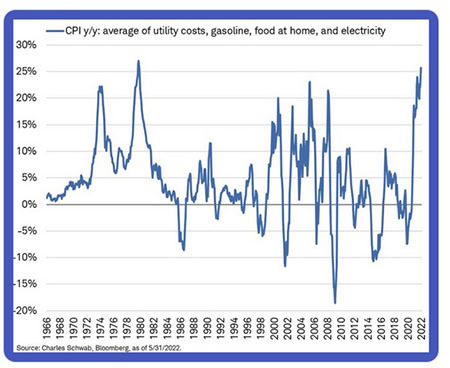 inflation by N/A is licensed under Internet N/A
N/A
by WorldTribune Staff, June 15, 2022

In an interview on Steve Bannon's War Room, Cortes cited a Charles Schwab analysis on the Consumer Price Index (CPI) for essentials like gas, food, and utility bills in stating that the true rate of inflation is nearly three times the 8.5-8.6% that is being reported.

"So, this is utilities, food – at home, not dining out at restaurants – and gasoline. These are necessities – these are things that people don’t have the luxury of passing up on to live in the United States of America," Cortes said.

"And you can see on that chart – it goes all the way back to the 1960s – we are at a high since 1980. 25% percent inflation… That chart right there reflects the pain, unfortunately, of the American people.”

Earlier this month, the Congressional Budget Office (CBO) confirmed that Team Biden's policies are to blame for the record-high inflation that is devastating American families. Further, the nonpartisan CBO stated that Team Biden's preferred fix, raising taxes, will only make the economy worse.

The CBO predicts that "Biden-caused inflation will persist into next year, tempered only by the Federal Reserve's willingness to raise interest rates, which will, in turn, cause the economy to slow or even contract," the Washington Examiner editorial board noted.

"Biden wants to make the economic situation worse by repealing the 2017 Tax Cuts and Jobs Act," the Examiner added. "Speaking of which, the CBO report also confirms that former President Donald Trump's signature tax bill has been a boon both to the economy and to government coffers. According to the CBO, federal corporate income tax collections in 2017, before the rate cut, came in at $297 billion. By 2021, they had jumped to $372 billion — a 25% increase in just four years, which significantly outpaces inflationary growth and also amounts to a larger percentage of the overall economy."