frdoc2 by N/A is licensed under Screen Grab N/A
Special to WorldTribune, June 20, 2021

America’s Frontline Doctors, a group that protests scientific fraud about COVID-19 therapies and irresponsible and damaging responses to the pandemic by health regulators and medical media, had their website, which provided the public with valuable informational resources, announced their site had been taken down by Amazon.

Frontline Doctors, however, are just the latest to be cancelled by the marketing giant over speech it disagrees with, regardless of the quality of the content.

Amazon started 2021 off ominously when it kicked the social media service Parler off its servers in January.

The attack decimated Parler’s business, which had grown explosively with the influx of tens to hundreds of thousands of American social and political conservatives seeking a new space for open discussion following massive purges and suspensions on Twitter. Prior to Amazon’s disruption in service, Parler had a valuation of $1 billion.

Frontline Doctors entered the public eye with the White Coat Summit in July of 2020. Squarespace removed their first website the day following the event. Once again they have become the target of the Left’s war against open information.

The Amazon marketing giant has now assumed the role of regulating medical information disseminated by board certified doctors.

Giving the group only four days' notice before deleting their site permanently from the Internet, Amazon wrote: 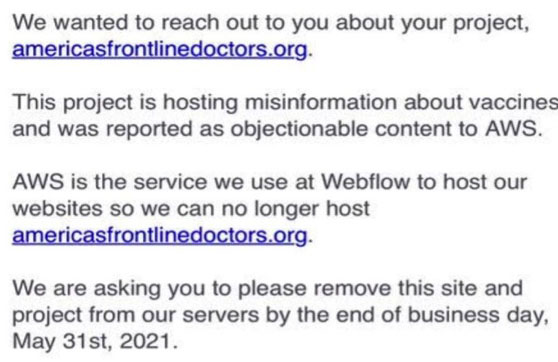 That Amazon now views itself as an arbiter of medical science and a self-appointed global censor of the public’s discourse and free-flow of knowledge about health is chilling.

Frontline Doctors stated, as reported by the Gateway Pundit: "Our team frantically worked around the clock to rebuild our website from scratch while utilizing servers around the world at great expense to our AFLDS team. We were forced to take immediate action because we will never allow Jeff Bezos and Amazon to censor us from speaking freely about medical treatments, medical studies, individual liberty, or challenging the government narrative surrounding COVID-19 vaccines."

The group is accepting donations to support their effort, here. The restored site is now up and running and can be accessed at America’s Frontline Doctors.

“Amazon’s motives are suspect, as they are closely aligned with the Biden Administration, due to massive government contracts,” the group said in a statement. “These contracts are worth billions, yet Amazon pays almost no corporate taxes.”

Addressing the Big Tech crony capitalism industrial complex, the group said, “Jeff Bezos and Amazon cannot argue with our scientific data and facts, so they would rather delete us entirely.

We have already been blacklisted on social media, and cannot host videos on YouTube. We must build our own Internet servers that cannot be silenced by Big Tech, Big Pharma, or Big Government.”

frdoc2 by N/A is licensed under Screen Grab N/A

Victor Davis Hanson: The ‘FBI is beyond redemption’