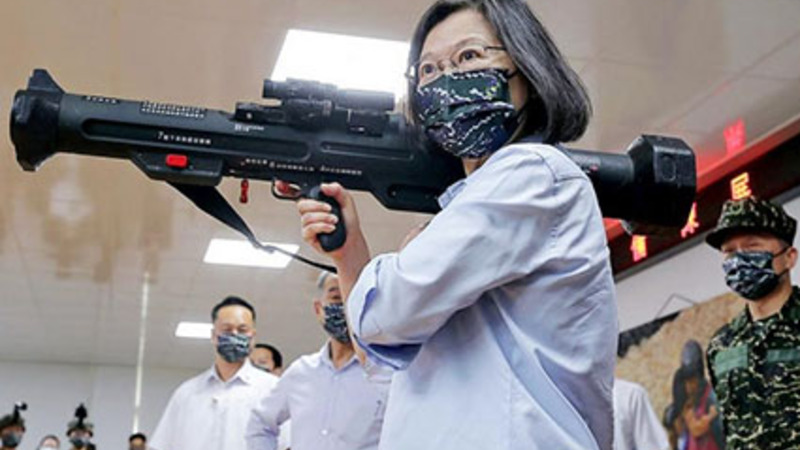 tsairckt by N/A is licensed under Public Domain Taiwan Presidential Office
Taiwanese President Tsai Ing-wen on June 2 holds a Kestrel rocket launcher while inspecting a military base in Taoyuan.
by WorldTribune Staff, June 21, 2022

Each time it is allowed to get away with "minor aggressions," the communist leadership in Beijing becomes more confident that China can invade and take over Taiwan, an analyst said.

"For Taiwan, the United States, and its allies it is crucial to step up countermeasures to the Chinese Communist Party’s (CCP) campaign of military intimidation and coercion," Rick Fisher, a senior fellow with the International Assessment and Strategy Center, wrote in a June 20 analysis for the Taipei Times.

During a June 2, 2022 Dragon Boat Festival weekend tour of Taiwan’s 66th Marine Brigade, "without warning" Tsai "paused to pick up and get the feel of the Taiwan-designed and made Kestrel shoulder-fired infantry rocket," wrote Fisher, a contributing editor for Geostrategy-Direct.com. "In that moment President Tsai herself was showing Taiwanese and the free world that it is possible to defy CCP invasion and hegemony — if she can fire an invasion-vehicle-killing rocket, so can every other adult citizen of Taiwan."

By May 2020, "this campaign of intimidation escalated on two levels. For the first time the PLAN Liaoning aircraft carrier, operating in a full carrier battle group east of Taiwan, coordinated with large groups of combat aircraft operating south and east of the island," Fisher wrote. "Then on May 24, four PLAAF H-6K bombers, and two Russian Air Force Tu-95MS bombers joined for the fourth China-Russia joint bomber exercise."

Fisher continued: "First, over the Sea of Japan, and then to the area where the Liaoning carrier battle group was exercising, this demonstrated anew that Russia will support CCP aggression against Taiwan and potentially engage in joint nuclear operations with the PLA against the United States and other countries that may come to defend Taiwan."

China thus far has not shot at Taiwanese aircraft responding to PLA intimidation exercises, and have not shot down any of the many Japanese, U.S., and allied aircraft that have responded to PLA aerial intimidation of Japan, Taiwan, or in the South China Sea.

"But on May 26 the PLA demonstrated it could cross this line, when somewhere in the South China Sea, a PLAAF J-16 strike fighter harassed a Royal Australian Air Force P-8A anti-submarine patrol aircraft [see: China harasses Canadian aircraft, attempts possible capture of Australian P-8A] by firing chaff flares while sharply crossing close to the nose of the P-8A," Fisher noted. "These chaff flares only had time to create small blooms of metal particles, but they could be dense enough to damage the engines of the Australian patrol aircraft, and if that damage was done near new Chinese bases in the Paracel or Spratly Island groups, far from diversion airfields in the Philippines or Malaysia, the possibility arises that the P-8A would have to land at a new Chinese base where it would be captured and exploited for intelligence."

Fisher wrote that it is time for Taiwan, the U.S. and its allies to respond to China's tactics by "demonstrating to the PLA that its aggression will result in massive losses of PLAN ships and PLAAF aircraft. This is needed both to deter the CCP from beginning to kill occasionally as part of its harassment, and to dissuade it from deciding to undertake major assaults like an invasion of Taiwan."

Fisher continued: "As the PLA has long used simulations of fixed Japanese and U.S. bases in Asia for precision long-range missile exercises, and has developed mobile target platforms to practice anti-ship ballistic missile strikes against U.S. Navy aircraft carriers, it is time to give the CCP some of the same medicine.

"As the PLA will rely mainly on large 'civilian' roll-on-roll-off (RORO) ferries and civilian cargo and passenger aircraft to transport the bulk of its soldiers, armor, and occupation forces to Taiwan, the U.S., Japan and Taiwan should build large plasticard simulations of these ferries that blow up spectacularly when hit by anti-ship missiles."

Another countermeasure to CCP intimidation, Fisher added, "would be to increase US-South Korean joint force exercises to levels approaching 200,000 troops, as during the “Team Spirit” exercises of the 1980s. In addition, Japan and the U.S. could begin a series of large amphibious and airborne force assaults to defend or recapture sparsely populated islands in the Ryukyu Island Chain, especially some that are close to Taiwan."

Fisher concluded: "The CCP and the PLA are using their campaigns of intimidation and coercion to help train for real wars against Taiwan, Japan, South Korea, the Philippines, Australia, India and the United States.

"It is time that the United States, its allies, and Taiwan, start campaigns of counter-intimidation training with increasing kinetic effects that demonstrate to the CCP that it will lose any wars that it starts."