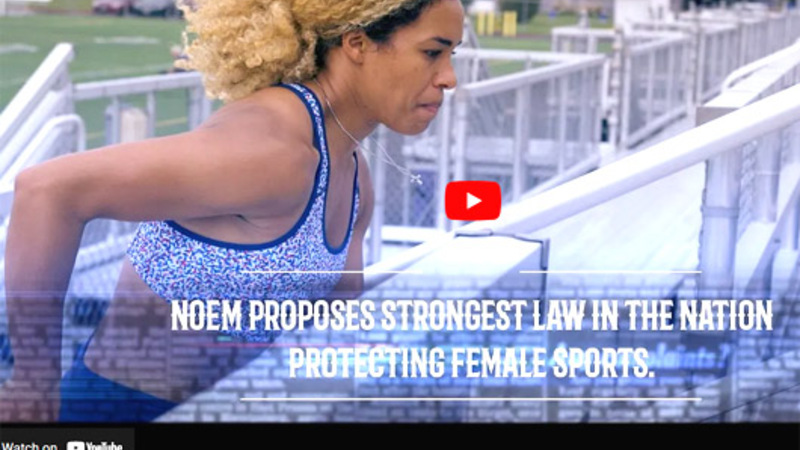 
Joe Biden has now been installed in the White House for a full year, and Republicans are back to being comfortable with telling the most howling of bald-faced lies to their voting base.

We’re not talking the usual exaggerations made by politicians but flagrant untruths on core issues, like the one South Dakota Gov. Kristi Noem insists upon flying up the flagpole in the face of easily documented reality.

“Caroline Woods is the former policy advisor and federal liaison to Gov. Kristi Noem. She worked in her office during the women's sports bill debate in 2021.” So reads the bio attached to the bottom of the Jan. 15 op-ed in The Rapid City Journal titled “Gov. Noem’s new campaign ad is gaslighting at its finest.”

Wood tracks the footprints of a once-highly regarded potential 2024 presidential candidate who sought to cater to her donor class on a cultural issue of great significance to the people who elected her, and then, when the blowback became too intense, didn't humbly and apologetically try to paddle back into the people’s good graces but instead shamelessly insisted that she has been steadfastly leading the charge on the issue all along.

“In South Dakota, only girls play girls’ sports,” a new Noem ad, which has been released nationally in a clear sign of her lofty political ambitions, stoutly proclaims. “Why? Because of Governor Kristi Noem’s leadership. Noem has been protecting girls sports’ for years, and never backed down.”

As anyone who paid the least bit of attention to politics in 2021 knows, this isn’t just 30 seconds of hot air. It is an outrageous lie.

Woods gives her former chief a history lesson from less than 10 months ago:


The South Dakota legislature put this strong bill on Gov. Noem’s desk prohibiting biological males from competing in women’s sports. It protected girls in K12 sports and college. She tweeted that she was “excited” to sign the bill. Well, she quickly changed her mind. She reversed course after getting woke pressure from people including Matt McCaulley, who double-dips as a [transgender surgery provider Sanford] Health lobbyist and a paid advisor to Gov. Noem, and D.C. elitist, Corey Lewandowski, who is just plain creepy.

After going back on her word, she took major heat from conservatives at the national and local levels. Trying to recover from her unforced error with her base, Gov. Noem then offered a “Style and Form Veto” to the legislature. This process allows a Governor to correct typographical errors like a mistaken code reference or a misplaced comma. Instead, her “style” revisions gutted protections for female college athletes to mollify corporate interests.

Wood states that Noem’s claim to have long been a champion of protecting girls’ sports is also a gross distortion. We’ve gone ahead and put the crucial part in bold:


Second, that her ad claimed that she’s been defending girls’ sports for years – referring to 4-H rodeo – is incredibly misleading. Let’s clear this up. There was a 40-year-old controversy regarding an interpretation of Title IX by United State Department of Agriculture (USDA). Title IX “prohibits discrimination based on sex.”

Basically, bureaucrats in Washington attempted to make 4-H rodeo co-ed. Most South Dakotans know that most 4-H events are co-ed, like showing cattle, sheep and more. However, rodeo is split between boys and girls (only New Mexico and South Dakota even have 4-H rodeo). In 2017, Gov. Noem did reject this administrative interpretation. But note, there were no transgender activists involved, no corporate pressure. In 2017, she helped resolve an obscure bureaucratic disagreement over 4-H, hardly the courageous stand her new ad would have us believe. The ad is a half-cooked attempt to distract from her caving to corporate pressure in 2021.

A Jan. 13 article at The Federalist adds further background on Woods’s assertions:

[Speaking to The Federalist, Noem’s campaign manager Joe] Desilets claimed, “Governor Noem has always led from the front on this issue” in an attempt to resurrect the Republican’s image after she very publicly capitulated to woke corporate pressure.... Noem’s chief of staff at the time of her veto, Tony Venhuizen, was on the board of the Sioux Falls Chamber of Commerce, which The Federalist reported had listed the defeat of the bill as a “tier 1” priority of “the highest importance.”

Noem has now appointed Venhuizen to the South Dakota Board of Regents in charge of the state’s public universities, which include many students that could be affected by failing to protect women from male sports competitors.

None of this information is new. What is new is a national political ad being released by a sitting Republican governor who confidently believes she can engage in the most egregious of falsehoods while courting the GOP grassroots and get away with it simply because she is wearing a cowboy hat. This is more than mere empty political posturing.

As WorldTribune has noted, uber-globalist private equity executive David McCormick’s campaign for a U.S. Senate seat in Pennsylvania is based entirely on the notion that if he looks, acts and talks like a down-home America First everyman, GOP primary voters in the Keystone State either won’t notice or won’t care that the company he served as CEO of until earlier this month manages state money for the communist Chinese. McCormick is so eager to repeat the successful hoodwinking of Virginia voters pulled off by Carlyle Group Deep Stater Glenn Youngkin in 2021 that he has disturbingly taken to dressing just like his fellow corporate China enthusiast.

We repeat: Bridgewater Associates manages state money for a foreign communist superpower. But here is McCormick in a jacket vest standing near a farmhouse:

Hey, if Kristi Noem can pose besides a street sign at the Reagan Ranch in her cowboy hat, why can’t this work too?

TONIGHT: Tune in to @newsmax at 8pm ET for a town hall featuring Governor @KristiNoem at the Reagan Ranch! pic.twitter.com/LK5re7Zxls

The threat of the attempted oligarchical coup currently underway in the GOP cannot be overemphasized. The Republican establishment, including Senate Minority Leader McConnell, is reportedly laboring to convince Arizona Gov. Doug Ducey to run for the upper chamber in 2022 after his second term in office expires.

“My background is in the private sector. The ice cream company was my business; we opened our first international stores in Shanghai and Beijing,” Ducey told China Daily in an interview on July 13 [2017].

Upon becoming governor, the ex-business exec who did enormously profitable personal business with the communist Chinese promptly put a “For Sale” sign written in Mandarin on his state’s most valuable assets, including “semiconductors, electronics, aerospace, our defense industry, mining and ores.”

There is a new Republican governor in Virginia with even more intimate China ties, and a leading GOP Senate candidate in Pennsylvania who outdoes them both.

Noem by N/A is licensed under Viedo Image N/A