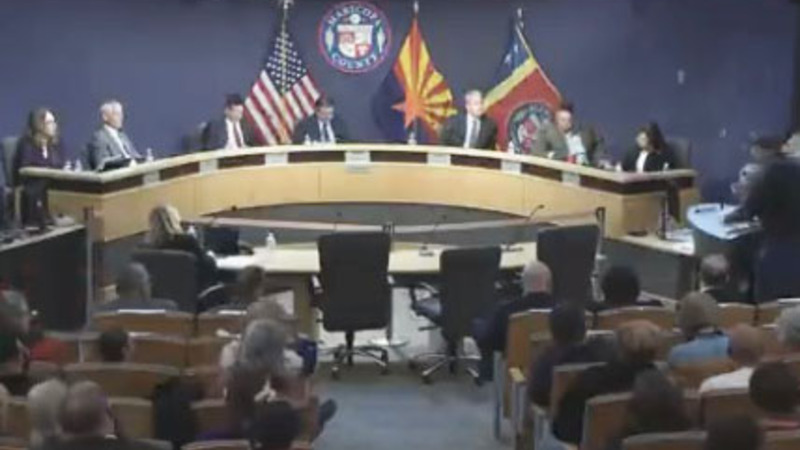 mcopa1128 by N/A is licensed under Video Image N/A
The Maricopa County Board of Supervisors met on Monday to certify the 2022 midterm results.
by WorldTribune Staff, November 29, 2022

The Maricopa County Board of Supervisors and County Recorder Stephen Richer met on Monday to canvass and certify the 2022 election results.

Maricopa County election officials insist that everyone who sought to vote in the 2022 midterms was given the opportunity, but stopped short of saying whether all of the ballots had been counted.

Election observers and other outraged citizens at Monday's certification hearing slammed county officials for going through with certifying an election in which a large percentage of printers and tabulators were somehow not working on election day after working without a hitch during early voting.

They also pointed to the conflicts of interest of Richer, who ran a PAC which focused on defeating GOP candidate for governor Kari Lake, and Democrat governor candidate Katie Hobbs for overseeing her own election as secretary of state.

A Maricopa County election marshal testified at the hearing that the voting machines were misreading ballots all day on Nov. 8. Scanners at her polling place also lost power on election day, the election marshal said.

One person who spoke at Monday's hearing noted: "The only thing you will be certifying is your corruption."

One poll observer said at the hearing that at 7 p.m. on election day there were still 675 people waiting in line when the polls closed. Only 150 people ended up voting and 525 voters were disenfranchised at just the one polling place.

Republicans reportedly made up at least 72% of those who voted on election day, and many were told that, due to the printer and tabulator malfunctions, to drop their ballots into “box 3” to be counted later.

"Election experts and election workers later reported that these uncounted ballots were mixed with already counted ballots, leaving no way of knowing if all legal votes were counted," The Gateway Pundit noted.

The Maricopa County Attorney’s Office earlier had responded to a detailed request from the Arizona Attorney General’s Office for information about problems which occurred with printers and tabulators at several voting centers on Nov. 8.

And while the five-page response to Jennifer Wright, head of the AGO’s elections integrity unit, includes the county’s legal arguments about some issued with the 2022 General Election, one thing it does not include is an apology from Maricopa County officials for the problems experienced by thousands of voters.

Former President Donald Trump summed up what is being seen by his tens of millions of supporters as the latest Arizona outrage:

"Massive numbers of “BROKEN” voting machines in Republican Districts on Election Day. Mechanics sent in to “FIX” them made them worse. Kari had to be taken to a Democrat area, which was working perfectly, to vote. Her opponent ran the Election. This is yet another criminal voting operation - SO OBVIOUS. Kari Lake should be installed Governor of Arizona. This is almost as bad as the 2020 Presidential Election, which the Unselect Committee refuses to touch because they know it was Fraudulent!"

mcopa1128 by N/A is licensed under Video Image N/A