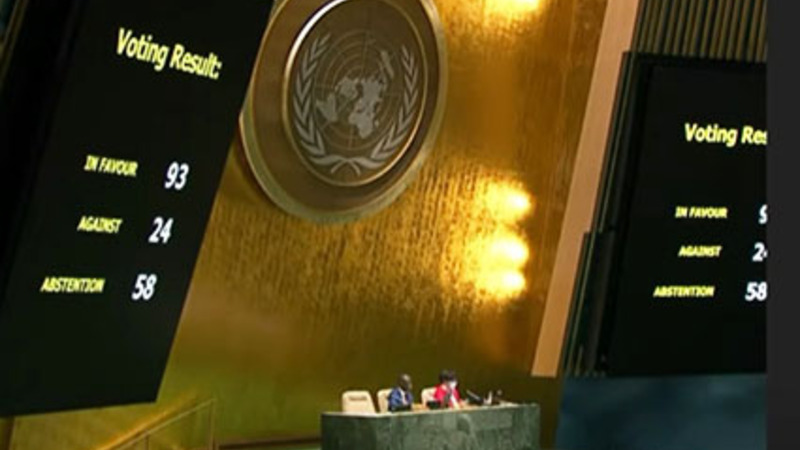 unrussvote by N/A is licensed under Video Image N/A
A completed resolution vote tally to affirm the suspension of Russia from the United Nations Human Rights Council is displayed during a meeting of the UN General Assembly on Thursday.
Special to WorldTribune.com

For the third time in a month, the UN General Assembly has resoundingly rebuked Russia for its actions in Ukraine. A tough resolution supported by 93 countries versus 24 backing Moscow, suspended Russia from the Human Rights Council.

The move was as overdue as it proved poetic justice to oust Putin’s Russia from its seat on the 47-member Geneva-based Council.

Though the victory in a sense represented the afterglow reaction to an earlier video speech by embattled Ukraine President Vlodomyr Zelensky before the Security Council, the censure reflected global reactions to an appalling litany of war crimes perpetrated by Russian military forces inside Ukraine.

Ukraine’s UN Amb. Sergiy Kyslytsya urged member states to keep the Human Rights Council from “sinking” and to suspend Russia, stating that it has committed “horrific human rights violations and abuses that would be equated to war crimes and crimes against humanity.”

There’s no question that tough diplomacy by the Americans and Europeans has isolated Russia diplomatically.

Yet this vote with 93 backers was far fewer than the first two earlier resolutions when 141 and 140 countries supported resolutions chiding Moscow for its invasion and causing the ensuing humanitarian trauma of Ukraine. In those two previous votes only four countries backed Russia; this time the number rose to 24.  Equally the number of abstentions jumped to 58.

Though originally off balance in the General Assembly, apparently Moscow’s Foreign Ministry has stabilized the political tailspin and reasserted party discipline of a sort with many of its traditional comrades and friends. China, Cuba, Iran, Nicaragua, Vietnam and Zimbabwe were among the usual suspects, voting alongside Russia.

So in a sense Russia got the “old band back together” but with some new members; Algeria, Bolivia, Ethiopia and Mali.

Impressively the 93 supporters of the resolution included the U.S., Canada, all of Europe along with East Asian partners such as Japan, South Korea and the Philippines. Equally, most of the Caribbean and Latin America backed the resolution too including Argentina, Chile, Colombia and Uruguay.

As American UN Amb. Linda Thomas-Greenfield stated, “We are holding Russia to account.”

The abstentions numbered 58 and offer a keen insight on how many countries are either quietly supporting Moscow or are afraid not to, or are simply politically fence sitting.  For example, in Latin America, Brazil, Mexico and El Salvador abstained. Equally in South Asia notables like India, Pakistan and Sri Lanka abstained again as did key ASEAN states such as Indonesia, Malaysia, Singapore and Thailand. Africa’s abstentions included Egypt, Kenya, Nigeria, Senegal and South Africa.

The UN Humanitarian Coordinator Martin Griffiths puts the conflict in stark context: “More than 11 million people have been forced to flee their homes, of whom 4.2 million are refugees in generous neighboring countries…on total more than a quarter of Ukraine’s population has fled in the extraordinary short time.”

The Ukrainian refugees have found welcome in Poland, Hungary, Slovakia and Romania.

British Prime Minister Boris Johnson paid a surprise walk around visit in Kiev to offer both his solidarity and an arsenal of new weapons for the embattled Ukrainians.

Where are the key American representatives?

While Europe’s political class fires rhetorical salvos and the United States hurls moral outrage at the Kremlin, the killing in Ukraine continues. The war is far from over, and Vladimir Putin is planning his next moves. This grim saga continues.

John J. Metzler is a United Nations correspondent covering diplomatic and defense issues. He is the author of Divided Dynamism the Diplomacy of Separated Nations: Germany, Korea, China (2014). [See pre-2011 Archives]
unrussvote by N/A is licensed under Video Image N/A