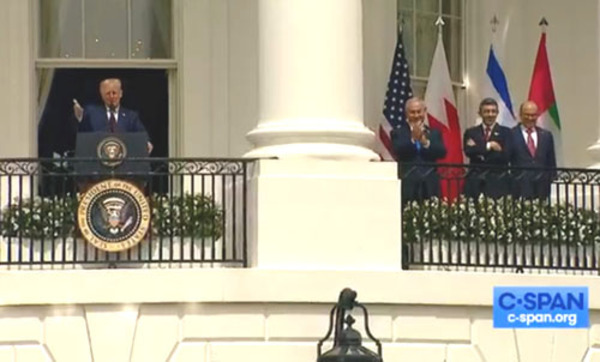 abaccrd by N/A is licensed under Public Domain C-SPAN
In September 2020, President Donald Trump hosted leaders from Israel, UAE and Bahrain to sign the Abraham Accords.
Analysis by WorldTribune Staff, May 25, 2021

One of the Left's leading U.S.-based propagandists, The Atlantic's David Frum, tweeted: "Remember all the Trump-Kushner self-congratulation about their Middle East successes?"

Other than launching another Orange Man Bad talking point, the Left's new diatribe has nothing to do with the actual Abraham Accords brokered by Trump and top adviser Jared Kushner, analysts say.

The Abraham Accords, which normalized ties between Israel and several Arab states, "were predicated on the idea that the United States could broker peace between Israel and once-antagonistic Arab nations by <em>bypassing</em> the intractable Palestinians, who have actively stood in the way of every agreement since 1994," National Review's David Harsanyi noted. "Though they are mentioned in passing, the agreement has nothing to do with Palestinians, who grumbled at the time, 'Our Arab brothers have abandoned us.' ”

But context is not a requirement for the Left. Following a barrage of anti-Israel diatribes from progressives in Congress and their media wing, Team Biden has apparently abandoned its support of the Abraham Accords.

Asked last week by a reporter specifically about the status of Trump’s accords, White House press secretary Jen Psaki responded: “Aside from putting forward a peace proposal that was dead on arrival, we don’t think they did anything constructive, really, to bring an end to the longstanding conflict in the Middle East.”

The Abraham Accords "were at the heart of the Trump administration’s Middle East strategy, easing Israel’s economic and diplomatic isolation and building up a regional coalition of allies to confront Iran and its proxies," Washington Times reporter Rowan Scarborough noted on May 24.

In March, The RAND Blog noted that the Trump-brokered accords continue to offer a "historic opportunity for Mideast growth" and "heralded a dramatic shift in the relationship between Israel and the Muslim nations of the world."

In 2020, candidate Joe Biden enthusiastically supported the Abraham Accords and even attempted to inject himself into how it came about. He also said he would build on Trump's accords.

“Today, Israel and the United Arab Emirates have taken a historic step to bridge the deep divides of the Middle East,” Biden said during the campaign. “The UAE’s offer to publicly recognize the State of Israel is a welcome, brave and badly needed act of statesmanship. And it is a critical recognition that Israel is a vibrant, integral part of the Middle East that is here to stay. Israel can and will be a valued strategic and economic partner to all who welcome it.”

Biden has "veered sharply" from that approach, Scarborough noted.

"The Trump Middle East policy renounced the Obama administration 2015 nuclear deal with Iran’s hardline Islamic regime; labeled the Iran-backed Houthis rebel movement in Yemen as a terrorist organization in its war with Saudi Arabia; killed Gen. Qasem Soleimani, Iran’s leader of foreign military operations who plotted the deaths of hundreds of American soldiers during the Iraq War and also directed militias and Iranian troops in support of the Syrian-Russian bombing of anti-government forces."

Team Biden, "by contrast, has re-engaged with Iran to restart the nuclear deal, which is designed to block development of atomic weapons until the year 2030, while lifting economic sanctions imposed by the Trump administration," Scarborough added. "The new administration took Yemen’s Iran-backed Houthis off the official U.S. terror list, while retaining the ability to impose sanctions, and ended support for Saudi 'offensive' operations in Yemen. The Houthis proceeded to launch streams of rockets into Saudi civilian areas."

Trump also cut off $200 million in funds to the Palestine Authority in Gaza and West Bank after the group boycotted peace talks.

Biden approved the resumption of millions of dollars in aid and reconstruction funding for the Palestinian territories.

Harsanyi noted for National Review that the approach taken by Trump and Kushner "had more results than anything tried by the Obama administration retreads who now populate the Biden administration," adding that Kushner had "never claimed the normalization deals would fix the Palestinian situation."

Here is what Kushner said in 2020 as the Trump administration was pursuing the accords: "You have 5 million Palestinians who are really trapped because of bad leadership. So what we’ve done is we’ve created an opportunity for their leadership to either seize or not. If they screw up this opportunity — which again, they have a perfect track record of missing opportunities — if they screw this up, I think they will have a very hard time looking the international community in the face, saying they are victims, saying they have rights. This is a great deal for them. If they come to the table and negotiate, I think they can get something excellent …

"The Palestinian leadership have to ask themselves a question: Do they want to have a state? Do they want to have a better life? If they do, we have created a framework for them to have it, and we’re going to treat them in a very respectful manner. If they don’t, then they’re going to screw up another opportunity like they’ve screwed up every other opportunity that they’ve ever had in their existence."

Harsanyi concluded: "Indeed, the Palestinians have extended their perfect track record of 'missing opportunities' (really, more like blowing them up). And the fact that Iranian-funded Hamas rockets are falling on Jewish cities or that riots are being perpetuated by the Palestinian Authority only further proves that Kushner was right: Waiting around for the theocrats in Gaza or corrupt former PLO officials in West Bank is a foolish endeavor."

abaccrd by N/A is licensed under Public Domain C-SPAN