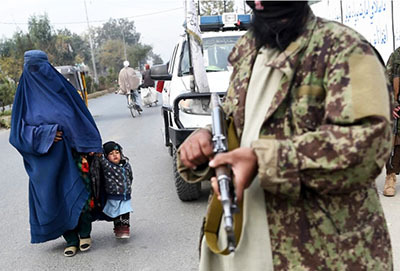 afghw by N/A is licensed under AFP N/A
The Taliban's Ministry for the Prevention of Vice and Promotion of Virtue ordered women to cover themselves head-to-toe when in public.
by WorldTribune Staff, May 10, 2022

Eight months after Joe Biden ceded control of Afghanistan to the Taliban, the terror organization now running the country has ordered women to cover themselves head-to-toe while in public.

"Those women who are not too old or young must cover their face, except the eyes, as per sharia directives, in order to avoid provocation when meeting men who are not mahram (adult close male relatives)," the Ministry for the Prevention of Vice and Promotion of Virtue said in issuing the decree.

Shir Mohammad, ministry official, said: "For all dignified Afghan women wearing Hijab is necessary and the best Hijab is chadori (the head-to-toe burqa) which is part of our tradition and is respectful."

The new decree from the terror organization also states that if a woman has no specifically important work to do outside of the household, it is better for her to stay at home.

The Taliban issued a specific set of escalating steps for anyone not complying with the head-to-toe covering order:

The Taliban also decided not to reopen schools to girls above grade 6, backing out of a promise the regime made when it came to power last summer as Team Biden withdrew U.S. forces, paving the way for Taliban rule.

Meanwhile, Afghanistan is now the only country in the world which publicly limits education by gender. Under Taliban rule, girls are banned from receiving secondary education. Additionally, the ministry for women's affairs has been disbanded, and in many cases women have not been allowed to work.

The terror group had already banned women from undertaking long road trips without a close male relative and ordered taxi drivers to refuse to accept female passengers not wearing an Islamic hijab. Men and women are also banned from visiting parks at same time.

Heather Barr of Human Rights Watch alleged the Taliban’s apparent goal is “to erase women and girls entirely from public life” and make them “wards and property of their male relatives, with no autonomy.”

Many analysts are being proven correct after saying it was foolish for Biden administration officials and those of other Western nations to hope the new Taliban leadership would be more open to women's freedoms.