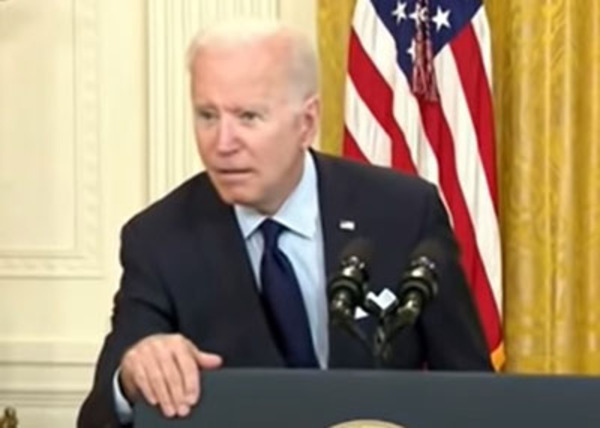 During the lighting of the National Christmas Tree last year, Joe Biden became the first occupant of the White House to take Christ out of Christmas.

He continued that tradition in his Christmas message to Americans on Thursday, most likely courtesy of his leftist handlers, by skirting around any mention of  Jesus or Christ.

“How silently, how silently, the wondrous gift is given,” the 80-year-old Biden began, as he delivered his address to reporters at the White House.

He spoke about a “child” born on Christmas but did not speak the child’s name, saying: “We look to the sky to a lone star, shining brighter than all the rest guiding us to the birth of a child, a child that Christians believe to be the Son of God.”

Some observers noted that Biden also had the gall to say: “I sincerely hope this holiday season will drain the poison that has infected our politics and set us against one another.”

He said this on the same day his Department of Justice was given $212 million via the omnibus spending bill to further persecute Jan. 6 protesters.

“Biden paved the way for his hard-left political allies to resume their longstanding War on Christmas by excluding any meaningful reference to God, Jesus, or even the meaning of Christmas, which is among the holiest days of the year for Christians,” Seamus Brennan wrote for the Association of Mature American Citizens on Dec. 18, 2021.

“Biden’s godless rhetoric surrounding the Christmas season stands in particularly stark contrast with the distinctively faith-based rhetoric of President Donald Trump — and Americans of faith and goodwill are sure to take note of the glaring difference,” Brennan added.

lostjb by N/A is licensed under Video Image N/A