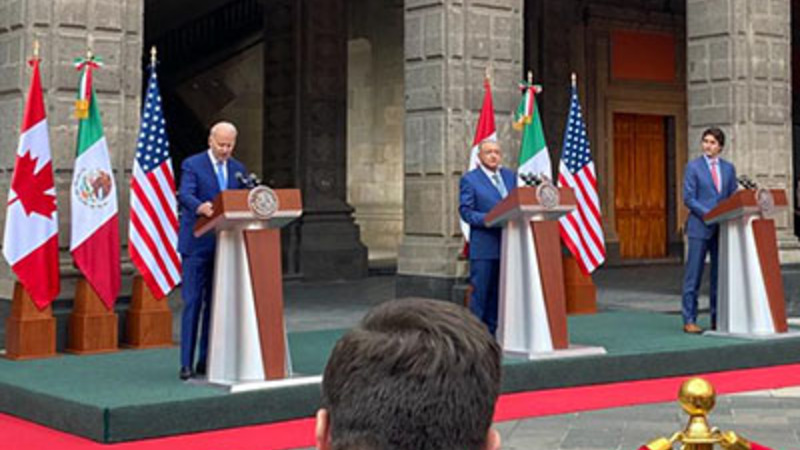 Big Media paid little attention when the White House on Jan. 10 released the so-called "Declaration of North America", in which the governments of the United States, Mexico, and Canada declared they would welcome record numbers of migrants and refugees; promote migrant and refugee integration; provide protection and more asylum capacity for migrants; and expand and promote more regular pathways to citizenship.

Liz Harrington, spokeswoman for former President Donald Trump, said in a Telegram post: "This is the most Marxist document to ever come out of the United States government."

The document, Harrington continued, is "full of lies about promoting 'security' and curbing illegal trafficking when, in fact, our government is facilitating human and drug trafficking through our open border."

This so-called "Declaration of North America ought to be ripped up and thrown into the nearest trash can, as fast as possible," Fox News host Larry Kudlow said.

"Much of the great success of this great country of ours can be traced to the role of immigrants," Kudlow continued. "Legal immigrants. Statue of Liberty-type Ellis Island immigrants who came here at enormous cost, but participated in our government's legal process and then literally went on to make America great.

"That’s wonderful! That’s what we should strive for and we can do that again. We ought to do that again. But what's going on in the war at our southern border has nothing to do with the great tradition of American immigration. Wars are lawless, destructive and inhumane. Now, this war could be won, for example. Let’s keep some sort of Title 42 in place for public health reasons, revert back to 'Remain in Mexico,' finish the wall, properly fund the various border control and policing resources necessary to guard America and protect it.

northam by N/A is licensed under Video Image N/A