Days after he pledged to put America's coal miners out of work, Joe Biden on Sunday vowed there would be "no more drilling" for oil in the U.S.

Speaking at a campaign event for struggling New York Democrat Gov. Kathy Hochul, Biden responded to a heckler in the crowd by saying: "No more drilling. There is no more drilling. I haven't formed any new drilling. No."

On Friday, Biden claimed during an event in California that he will shut down coal mines in favor of wind and solar plants. That prompted West Virginia Democrat Sen. Joe Manchin on Saturday to say Biden's claims are the reason "the American people are losing trust" in the current occupants of the White House.

"Being cavalier about the loss of coal jobs for men and women in West Virginia and across the country who literally put their lives on the line to help and power this country is offensive and disgusting," Manchin said.

Meanwhile, as Biden and Democrats continue to accuse Republicans of inciting "political violence" ahead of Tuesday's vote, a supporter of New York Republican candidate for governor Lee Zeldin was choked when she showed up at a Hochul campaign event.

Angelica Torres told Fox News she was only trying to exercise her First Amendment rights when she was choked and assaulted after showing up with an anti-Hochul sign at an event for the Democrat governor outside the Stonewall Inn in Manhattan on Saturday.

In Democrat land, this is how it went down: Torres inflamed the situation when her neck fell into the man's hand. 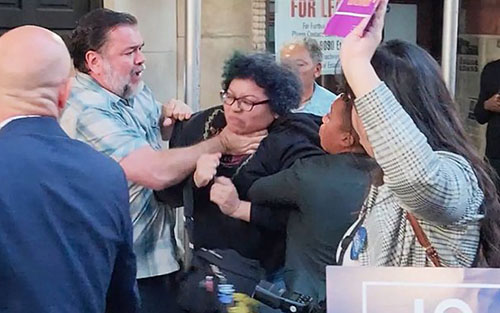 Hochul has continually downplayed violent crime while Zeldin has made it a top issue.

That led to a truly startling moment in Hochul's recent appearance on MSNBC.

"Here's the problem: we don't feel safe," an MSNBC host actually said to the face of Hochul.

Even MSNBC is calling out Democrat Kathy Hochul.

"Here's the problem: We don't feel safe...I walk into my pharmacy, and everything is on lockdown because of shoplifters. I'm not going in the subway. People don't feel safe in this town." pic.twitter.com/JUKhxXCk4c — RNC Research (@RNCResearch) November 5, 2022

Meanwhile, on Sunday, Biden again did not propose any plans to dig the U.S. out of the economic turmoil his team has caused. Instead he again painted Nov. 8 as a "battle for democracy."

Biden said that there are 300 'election deniers' on the ballot in the 2022 midterms, and claimed Republicans want to deny Democrats the right to vote as well as making sure their votes don't count when they are cast.

"You can't only love the country when you win," the president said in claiming that some lawmakers have already suggested they won't accept the results. We'll see if that holds true if the predicted Red Wave knocks Biden's party out of power.

hochuljoe by N/A is licensed under Public Domain C-SPAN