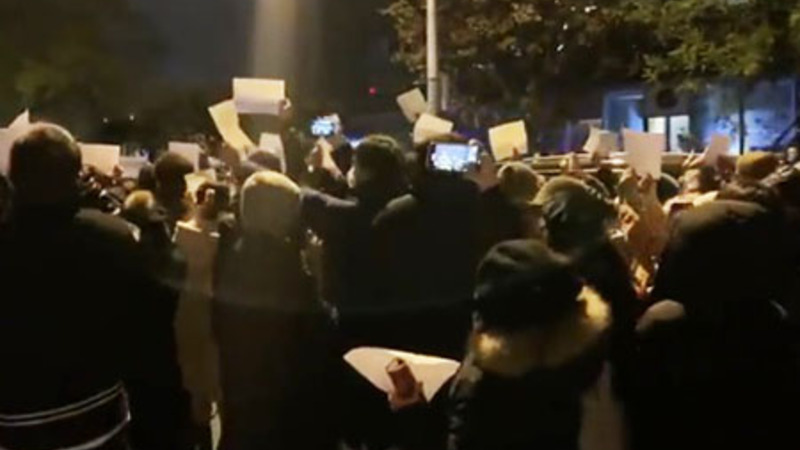 Monday marked the third straight night of defiance as crowds gathered to protest against Covid restrictions in Beijing, Shanghai, and other cities. Protesters in Beijing held blank sheets of paper, symbolizing censorship, and demanded Xi step down.

As the government moved to quash any new protests, the likes of which have not been seen since pro-democracy rallies in 1989 were crushed, police checked protesters' phones for foreign apps used to spread word of the protests while reporters were intimidated, witnesses say.

Meanwhile, the Biden administration issued a defensive statement about its own Covid policies in response to China's nationwide protests and failed to condemn the CCP regime's brutal lockdown policies.

The White House has been reluctant to comment on the suppression of ongoing nationwide protests by the heavily authoritarian regimes in Iran and China now being shaken by Iranian and Chinese protesters demanding freedom.

The demonstrations exploded in several large cities over the weekend following a deadly fire on Friday in Urumqi, capital of the remote region of Xinjiang, which officials said killed 10 people. Unconfirmed reports said some residents were locked into their apartments and that other restrictions caused by Xi's Covid policies delayed rescue efforts.

In Beijing, the focal point was Sitong Bridge, where a lone protester last month hung banners calling for freedom instead of lockdowns and demanding Xi be deposed. Dozens of uniformed and undercover police swarmed the area around the bridge on Monday evening after protesters chanted lines from the banners the previous night.

"Officers questioned foreign journalists who arrived in the area after word of a potential protest on Monday evening began circulating on an encrypted messaging app," the Wall Street Journal reported.

In Shanghai, police reportedly were checking the phones of people who showed up at People’s Square Station, searching for foreign apps including Instagram, Twitter and Telegram, according to messages posted in a chat room used by protesters and viewed by the Journal.

Video from Shanghai showed BBC reporter Edward Lawrence being arrested and dragged away by CCP officers.

The BBC released a statement, saying "The BBC is extremely concerned about the treatment of our journalist Ed Lawrence, who was arrested and handcuffed while covering the protests in Shanghai. He was held for several hours before being released. During his arrest, he was beaten and kicked by the police. This happened while he was working as an accredited journalist."

The BBC said it did not accept the CCP's explanation that Lawrence was arrested for his own good so he would not contract Covid from the protesters.

Police also put down a protest in Hong Kong, where 20 or so mostly young people gathered in the central business district on Monday evening, holding blank sheets of paper and flowers in solidarity with protesters in the mainland and to mourn those who died in the fire in Urumqi.

Police forced the small groups of protesters in the central area of Hong Kong to disperse after filming them and taking down their personal information.

Protesters have also been interrogated by police via phone call after attending the large-scale protests, a protester told AFP on Monday.

The protester told AFP that by Monday evening she and five of her friends who attended the protest had received phone calls from Beijing police, demanding information about their movements.

In one case, a police officer visited her friend’s home after they refused to answer their phone.

“He said my name and asked me whether I went to the Liangma river last night… he asked very specifically how many people were there, what time I went, how I heard about it,” she told AFP, asking to stay anonymous for safety reasons. “The police stressed that last night’s protest was an illegal assembly, and if we had demands then we could submit them through the regular channels.”

“I never thought that this kind of civil society activity could ever happen in China,” the protester added.

“Facts have fully proved that every version of the prevention and control plan has withstood the test of practice,” it read, promoting recently announced efforts to “optimize and adjust” controls to make them less disruptive to the economy and individual lives.

No Chinese media have mentioned the protests.

The Biden administration did not condemn the CCP's cracking down on protesters. The White House released a statement, saying: "We’ve said that zero COVID is not a policy we [sic] pursuing here in the United States. And as we’ve said, we think it’s going to be very difficult for the People’s Republic of China to be able to contain this virus through their set COVID strategy."

The statement continued: "For us, we are focused on what works and that means using the public health tools like: continuing to enhance vaccination rates, including boosters and making testing and treatment easily accessible. We’ve long said everyone has the right to peacefully protest, here in the United States and around the world. This includes in the PRC."

Texas Republican Sen. Ted Cruz tweeted in response: "Pitiful. At a potentially historic inflection point, Dems shill for the CCP. Pure weakness from the Biden administration. It’s almost as if Biden wishes he was driving a tank in Tiananmen Square…."

Conservative commentator Jack Posobiec noted: "Remember, no Western leaders said a thing about the CCP's covid zero lockdowns. The same way they are silent about the protests today. They're all on the same team."

Speaking to NBC's Andrea Mitchell, Fauci said: "I remember early on, they [Chinese leadership] were saying, and I think accurately, that they were doing better than almost anybody else," because of their severe lockdown. He continued and said, "you use lockdowns to get people vaccinated."

This is the horrific fire in Urumqi where residents burned alive under the CCP’s terror lockdowns pic.twitter.com/wnepkc5oWm