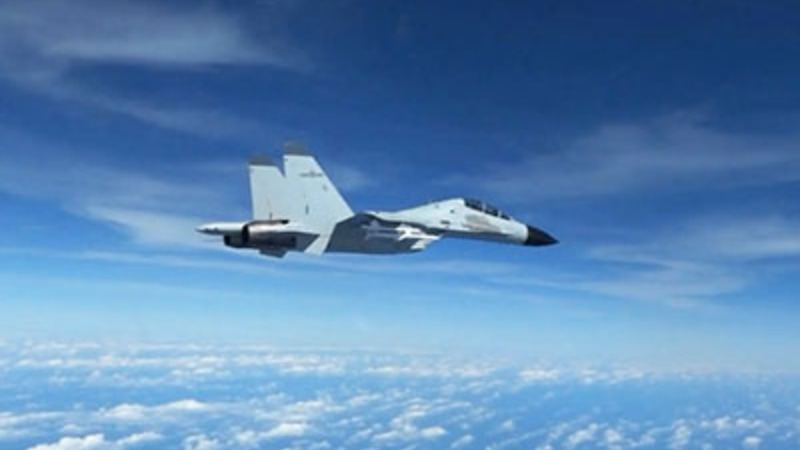 chij11 by N/A is licensed under Public Domain U.S. Department of Defense
The Chinese navy J-11 fighter jet was recorded getting close to a US Air Forces plane on Dec. 21, 2022.
by WorldTribune Staff, January 4, 2023

On Dec. 21, a Chinese fighter jet came within 20 feet of colliding with a U.S. military aircraft in international airspace over the South China Sea, U.S. Indo-Pacific Command (Indo-PACOM) said in a statement.

"The PLAN pilot flew an unsafe maneuver by flying in front of and within 20 feet of the nose of the RC-135, forcing the RC-135 to take evasive maneuvers to avoid a collision," the statement added.

Video released by the Pentagon (see below) appears to show the Chinese fighter closely approaching the American jet on its left, before briefly cutting in front of the RC-135 and veering back away to the left. The video appears to be shot from inside the RC-135.

China cranked up its propaganda machine to put out a different story on the incident.

The Chinese pilot "handled the incident in accordance with relevant laws and regulations, and conducted professional and standard operations, which fully demonstrated the Chinese military's responsible attitude towards regional security and the safety of front-line personnel," the PLA statement said.

Wendell Minnick, author of the substack.com podcast/newsletter "China In Arms" noted that China "did the same thing in the 2001 EP-3 incident, blaming the U.S. pilot, even though the Chinese pilot had been hotdogging it for some time, even putting his email address up on the window for the pilot to see. The U.S. complained formally to the Chinese on several occasions, but it never made a difference. The Chinese pilot that died was a hero. They even put out little miniature statues of him for the kids to play with. China never, ever, accepts the blame for anything. They never cooperated on COVID and they never will cooperate on anything that makes the CCP look bad. Apologizing is a loss of face. Two things will survive in a nuclear war with China - cockroaches and Communist Party discipline."

China claims vast swaths of the South China Sea that overlap with the exclusive economic zones of Vietnam, Malaysia, Brunei, Indonesia and the Philippines.

Trillions of dollars in trade flows every year through the waterway, which also contains rich fishing grounds and gas fields.

chij11 by N/A is licensed under Public Domain U.S. Department of Defense