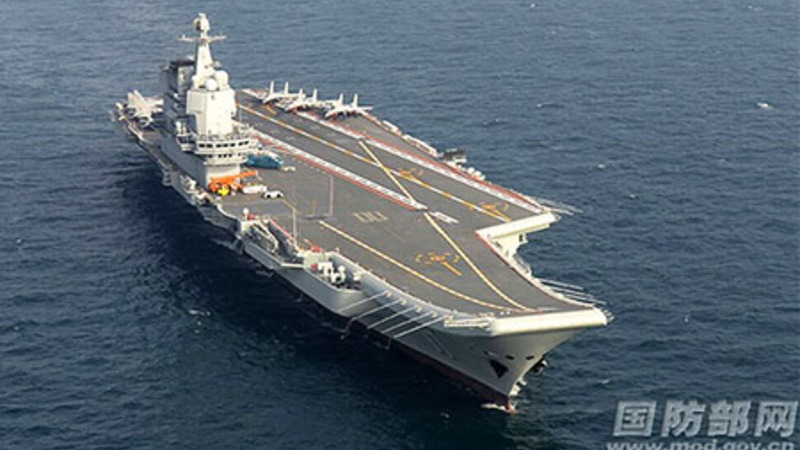 shandong by N/A is licensed under China Ministry of National Defense N/A
The Chinese aircraft carrier Shandong sailed through the Taiwan Strait in March while an American destroyer reportedly 'shadowed' the carrier at least for part of its route.
Special to WorldTribune.com

Is China drawing yet another provocative red line, this time in the narrow but strategic Taiwan Strait?

The Beijing regime recently claimed that the Taiwan Strait, the defensive body of water buffering the island democracy from Mainland China, is actually sovereign Chinese territory.

Taiwan’s Premier Su Tseng-chang stated clearly that the Strait was by “no means China’s inland sea.”

Speaking separately Taiwan’s Foreign Ministry spokeswoman Joanne Ou reiterated that the Taipei government considers the Taiwan Strait to be international waters, except for the 12-nautical-mile strip defined as territorial waters. Quoted in the authoritative Taipei Times, she accused Beijing of “distorting international law” in ignoring Taipei’s 12-nautical-mile sovereignty claim in the Taiwan Strait.

By downgrading the Strait to its own exclusive economic zone (EEZ), she said that China “revealed its ambition to annex Taiwan.”

Beijing claims that the Taiwan Strait falls within China’s territorial waters and EEZ as defined by the UN Convention on the Law of the Sea (UNCLOS) and domestic law. “China enjoys sovereign rights and jurisdiction over the Taiwan Strait,” asserted the PRC’s Foreign Ministry. Under the Law of the Sea treaty, states can claim waters within 12 miles of their coastline as under their full sovereignty; they can equally claim waters within 200 nautical miles off their coastline as an exclusive economic Zone.

Given that most of the Taiwan Strait is less than 200 nautical miles wide, there’s thus overlapping EEZ claims by both Mainland China and Taiwan. The waterway is 80 miles at its narrowest.

Not letting the facts or geography get in the way of reality, Beijing is following the Putin playbook solemnly declaring selective “historical facts” and “legal precedents” based on geographic proximity as providing a legal framework for its control.

From this stems China’s classic communist policy to harass and intimidate Taiwan’s 23 million Citizens; yet the tactic may trigger the exact opposite effect as ethnic Chinese on Taiwan feel less and less beholden to Beijing’s imperious diktat.

In November 2013, the PRC declared an air defense identification zone (ADIZ) in the East China Sea. The legitimacy and legality of this ADIZ is questioned by many states.

China equally claims the vast South China Sea and its scores of uninhabited islands as “China’s historic territory.”  As recently as 2016 the Permanent Court of Arbitration in the Hague clearly rejected China’s claims to huge swaths of the strategically important waters, where among other things China has been building artificial islands and occupying sovereign Philippine territory.

Beijing’s South China Sea claims evoke Benito Mussolini’s assertion that since the Mediterranean Sea was under ancient Roman Control it could thus be regarded as fascist Italy’s Our Sea/ Mare Nostrum!

China has never renounced the use of force to return what it claims to be a renegade province to communist control.

The provocative practice of PRC military jet flights probing Taiwan’s airspace is no different than Putin’s probing of Ukraine’s territory prior to the February invasion. Significantly the lessons of Russia’s attack on Ukraine pose a stark and sober reminder to Beijing that any planned cross-strait invasion is complicated and high-risk.

To the backdrop of growing political tensions between China and the U.S., Japan and Australia in particular, Beijing has been massively upgrading its military potential. China has inaugurated its Third aircraft carrier, the Fujian not so coincidentally named after the China’s coastal province bordering Taiwan.  Though the new Chinese designed and built ship will take years to become fully operational, it signals a sea change in Beijing’s more assertive ocean strategy.

To underscore the severity of the situation, in recent discussions between U.S. Defense Secretary Lloyd Austin and his Chinese counterpart Defense Minister Wei Fenghe warned, “If anyone dares to split Taiwan from China, the Chinese army will definitely not hesitate to start a war no matter the cost.”

Despite Ukraine’s lesson, there’s a significant risk that China will take this military gamble in the coming years.

John J. Metzler is a United Nations correspondent covering diplomatic and defense issues. He is the author of Divided Dynamism the Diplomacy of Separated Nations: Germany, Korea, China (2014). [See pre-2011 Archives]
shandong by N/A is licensed under China Ministry of National Defense N/A