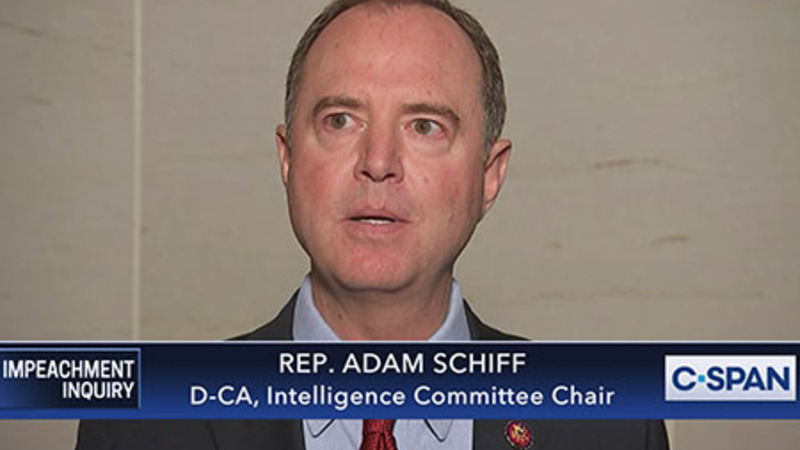 The revelations that have come out of special counsel John Durham’s investigation into the origins of Trump-Russia collusion has led even the leftist Washington Post to admit it got the story wrong.

No such admission has come from Rep. Adam Schiff, the California Democrat who was one of the biggest promoters of the bogus Christopher Steele dossier.

Schiff, or “Pencil Neck” as President Donald Trump referred to him, still insists that he was absolutely right to promote the discredited Steele dossier.

Law professor Jonathan Turley noted that Schiff’s interview on NBC’s Meet the Press “may be the final proof of the death of shame in American politics.”

Schiff told Meet the Press host Chuck Todd: “I don’t regret saying that we should investigate claims of someone who, frankly, was a well-respected British intelligence officer. And we couldn’t have known, of course, years ago that we would learn years later that someone who is a primary source lied to him. [Igor] Danchenko lied to Christopher Steele and then lied to the FBI. He should be prosecuted. He is being prosecuted. And I’ll tell you this, if he’s convicted, he should not be pardoned the way Donald Trump pardoned people who lied to FBI agents, like Roger Stone and Mike Flynn. There ought to be the same standard in terms of prosecuting the liars. But I don’t think there ought to be any pardon, no matter which way the lies cut.”

As for Durham’s investigation, Schiff dismisses it as a “politically motivated.”

“The Russian collusion scandal was not some harmless political ploy,” Turley noted. “Lives were destroyed. Carter Page, who was never charged with a single crime, was labeled a Russian agent and pilloried across networks and print media. A fortune was spent on investigations by Congress, two special counsels, and inspectors general investigations. Hundreds of people faced questioning and many spent their savings on legal representation. A presidency was derailed, agencies like the Justice Department and the FBI were whiplashed by scandal, and Congress dropped a myriad of other issues to focus on various investigations.?

And there to push known lies every step of the way was Adam Schiff.

Turley destroyed any argument Schiff could possibly concoct for defending his promotion of the dossier:

First, many would guffaw at the claim that Steele was and remains a “well-respected British intelligence officer.” Soon after the dossier was shopped to the FBI, British intelligence flagged credibility problems with Steele. The FBI severed Steele as an asset. Even his own sources told the FBI that Steele wildly exaggerated information and distorted intelligence. Most recently, Steele went public with a laughable claim that Michael Cohen, Trump’s former counsel, was lying to protect Trump despite spending years trying to get Trump charged criminally.

Second, Schiff ignored repeated contradictions in Steele’s dossier as well as evidence that the dossier was paid for and promoted by the Clinton campaign. In 2017, even fired FBI agent Peter Strzok admitted that “we are unaware of ANY Trump advisors engaging in conversations with Russian intelligence officials” and “Steele may not be in a position to judge the reliability of his subsource network.” Schiff would have had access to some of this intelligence. Indeed, while the Clinton campaign was denying that it funded the dossier, American intelligence knew that that was a lie. Indeed, until the Durham indictments, Schiff continued to defend the Russian collusion investigation and the Steele dossier.

Third, Schiff attempts to portray the sole problem with the Steele dossier as Russian analyst Igor Danchenko. That is simply not true. Schiff was long aware that there were allegations of misleading or false information given by the FBI to the secret court. Indeed, the first Durham conviction was of Kevin Clinesmith, the former FBI agent who pleaded guilty. Schiff was aware that President Barack Obama was briefed in 2017 that Hillary Clinton was allegedly planning to manufacture a Russian collusion scandal — just days before the start of the Russian investigation. The dossier was riddled with disproven allegations.

Fourth, Schiff states that he merely sought to investigate allegations. However, Schiff was one of the most active members fueling the Russian collusion allegations. Indeed, when the Mueller investigation found no proof of Russian collusion, Schiff immediately went public to claim that he had evidence of collusion in his committee files. It was meant to keep the scandal alive. Schiff has never produced his promised evidence of collusion.

Turley concluded: “We now live in a post-shame era where the only shame is yielding to the impulses of decency or decorum. The Russian collusion scandal served its purpose and Adam Schiff would be the first say that there is no shame in that.”

pnck by N/A is licensed under Public Domain C-SPAN