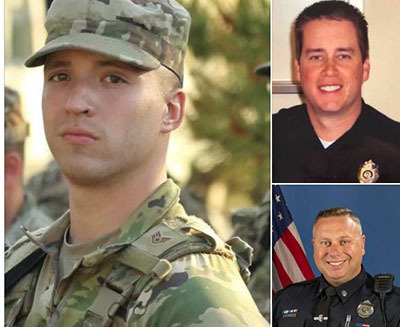 Three Massachusetts police officers, all under the age of 50, and a 16-year-old girl playing flag football are among the latest additions to the "died suddenly" list.

According to the Massachusetts State Police, three active-duty law enforcement officers, all from South Shore communities, passed away suddenly within the last seven days.

Officer John F. Santos, 25, of The Plymouth County Sheriff’s Department, passed away at Beth Israel Deaconess Medical Center in Boston on Dec. 28 after succumbing to a brain aneurysm.

Santos would have been a member of the Massachusetts State Police 88th Recruit Training Troop. He was also a member of the United States Air Force, reaching the rank of Staff Sergeant, and served overseas in 2019. Officer Santos has a fiancé and an unborn son.

No cause of death was reported.

Officer Christopher A. Davis, a 17-year veteran of the Stoughton Police Department, passed away at the Good Samaritan Medical Center in Brockton on Dec. 31 at the age of 42. He was a member of the Stoughton Police Special Operations Unit and was the department’s defensive tactics instructor. Additionally, he served as a certified arson investigator, investigating fire incidents alongside the Stoughton Fire Department since 2011. He was awarded numerous commendations from the SPD during his 17 years of service, including a Distinguished Service Award in 2012. Officer Davis had a fiancé and a daughter.

No cause of death was reported.

Ashari Hughes, a 16-year-old at Desert Oasis High School in Las Vegas died after suffering a “medical emergency” during a flag football game on Jan. 6, according to the school’s principal.

“Staff immediately began providing medical aid and continued until paramedics arrived,” Principal Ian Salzman wrote in an email Friday to the school community. “It is with a heavy heart that I inform you that the student passed away.”

The cause and manner of death were pending, the Clark County coroner’s office said.

Hughes was playing varsity flag football against Valley High School, a game that was scheduled to begin at 4:30 p.m., according to the school’s website.

masspol by N/A is licensed under Public Domain N/A