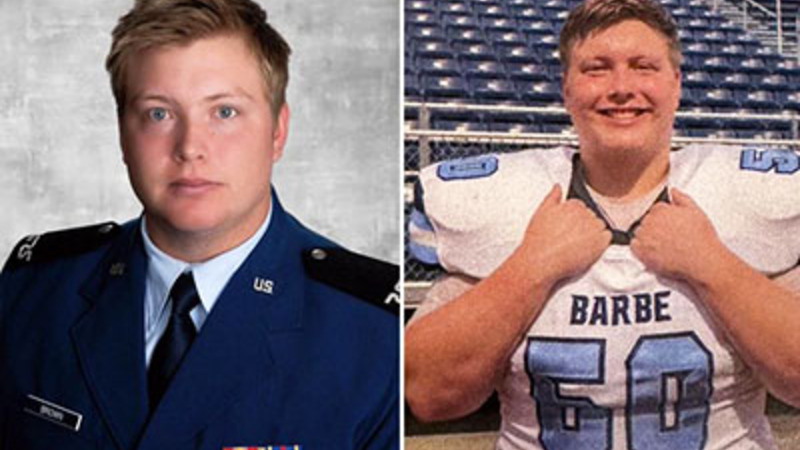 A 21-year-old football player at the Air Force Academy and a 17-year-old "superfan" at a Brown County, Ohio high school are two of the latest young men added to the "died suddenly" list.

“Hunter was a standout offensive lineman on the Falcon football team and was well-respected in his squadron,” said Lt. Gen. Richard M. Clark. “The entire U.S. Air Force Academy mourns his loss, and our hearts and condolences are with his family, his squadron, and all who were touched by this incredible young man.”

Brown was assigned to Cadet Squadron 16 and was pursuing a major in management, a minor in French, and had completed back-to-back winning seasons in 2021 and 2022 as an offensive lineman with the Falcon football team. Brown graduated from the U.S. Air Force Academy Preparatory School in May 2021.

Agents of the Air Force Office of Special Investigations and the El Paso Sheriff’s Office initially secured the response area and are conducting an investigation, standard protocol for any military on-base death, the Academy said.

With heavy hearts we share the loss of a cadet. C3C Hunter Brown died Monday after suffering a medical emergency while on his way to class. Our thoughts are with his family, friends, teammates and fellow cadets.#NeverForgotten pic.twitter.com/amPlznZqTC

"Blaze was a very large part of our school community," Western Brown High School Principal Heather Cooper wrote in a Monday letter to district families, adding that Jacobs was also one of the school's "biggest fans."

"So we know this is going to be a struggle for everyone in our school family," Cooper wrote.

Cooper's message states that Jacobs had cardiac arrest activity during class and was transported from the high school to a hospital sometime Monday morning. By evening, Jacobs had passed away.

Jacobs received CPR for over an hour, according to a statement on the GoFundMe created to cover his medical and funeral expenses.

"He loved sports, especially his own schools team, where he attended every home game and sat in the student spirit section," the GoFundMe description reads.

"Blaze was an amazing person, he touched many people’s hearts, if you ever have met him you would never forget him. Blaze will never be forgotten and neither will his happy cheerful spirit."

hbrown by N/A is licensed under Social Media N/A