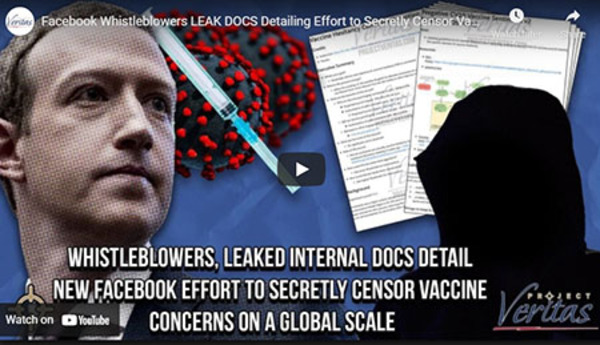 Did average Americans have access to the following news?
These are just three reports of people who had adverse reactions or died after receiving the jab.

They are also representative of reports that Facebook routinely suppresses as the social media giant cracks down on so-called vaccine "hesitancy."

“It doesn’t match the narrative,” one insider says in the video. “The narrative being, get the vaccine, the vaccine is good for you. Everyone should get it. And if you don’t, you will be singled out as an enemy of society.”

The leaked documents indicate a “Vaccine Hesitancy Comment Demotion” tier system was set up to run on Facebook and Instagram accounts, which number nearly 3.8 billion worldwide.

The Facebook insider says in the video that comments on the platforms may be suppressed if they go against the established “narrative” by opposing or questioning the vaccines.

Tier 2, described as “Indirect Discouragement,” includes those who promote vaccine alternatives such as herd immunity or share “[p]otentially or actually true events or facts,” such as critical studies or descriptions of their own painful side effects.

“Basically, your comment is going to be suppressed,” said the insider. “As to the scale of that suppression, it’s hard to say. We’ll have to look at it like a case-by-case basis. They call it a ‘position change.’ ”

Project Veritas founder James O’Keefe noted that Facebook CEO Mark Zuckerberg had in a July livestream obtained by Veritas expressed concerns about the “long-term side effects” of vaccines.

“Zuckerberg seemed to change his mind, evolve on the issue of vaccines,” O’Keefe said. “The Facebook policy itself would have prevented Zuckerberg from saying what it is that he had said, just a few months ago. Pretty crazy.”

The second Facebook “insider,” identified as a Data Center Engineer, compared the company’s suppression of vaccine commentary as “having a relationship with somebody that’s controlling and abusive.”

fbvac by N/A is licensed under Screen Grab N/A