Documents from Pfizer's Covid vaccine trials which were released under court order show a "massive" rate of miscarriages among pregnant women who received the injection, according to Dr. Pierre Kory.

Kory reported that he poured through the released documents and was alarmed by what he found in Section 5.3.6, Page 12 of the document (see below) titled “Cumulative Analysis of Post-Authorization Adverse Event Reports.”

"In this paragraph, at first read, it is just a list of adverse events and numbers, detailed in a way that is confusing at best, and obfuscating at worst.

"I think it is the latter because, if you do some simple arithmetic trying to parse that paragraph, you end up with this:

"270 pregnancies were reported in vaccinated women during the first 12 weeks of the vaccine campaign. In 238 of them, 'no outcome was provided.' So, they only knew the outcome of 32 pregnancies reported. What happened in those 32 pregnancies they followed up on?"

In these 32 pregnancies, there were:

"So, 25 of the 32 pregnancies with known outcomes resulted in a miscarriage, a rate of 78%. Note that miscarriage normally occurs in only 12-15% of pregnancies," Kory wrote.

Kory continued: "This only adds up to 29 known outcomes, but then they note that 'two different outcomes were reported for each twin' and then they talk about 'fetus/baby cases as separate from mother cases.' I have no idea how to interpret this explanation of outcomes, so it may have been one or two less (or more) deaths then.

"So, of the 32 pregnancies they knew the outcome of, 87.5% resulted in the death of the fetus or neonate. Burying this data in the way and not alerting the world to what they found, is criminal activity yet again. This is what they do and have always done when one of their novel products begins to cause death. It is just these kinds of actions that have resulted in the billions of criminal and civil fines they have paid in the last 20 years alone. They have done this with numerous newly launched medications such as Avandia, Bextra, Vioxx, and let’s not forget oxycodone. Many hundreds of thousands of deaths have resulted with the burying of adverse event and death data around newly launched products until they are caught, pay massive fines, and then carry on doing the same thing."

The nonprofit group Public Health and Medical Professionals for Transparency sued the FDA last September for access to the documents. The agency denied the Freedom of Information Act (FOIA) request to expedite the release of mRNA vaccine review documents. In a November 2021 joint status report, the FDA proposed releasing only 500 pages of the documents a month, which would have taken up to 75 years.

In a January court ruling, U.S. District Judge Mark Pittman of the Northern District of Texas, ordered the Food and Drug Administration (FDA) to release around 12,000 documents immediately, and then 55,000 pages a month until all documents were released, totaling more than 300,000 pages.

While Dr Naomi Wolf and the WarRoom/DailyClout Research Volunteers recently corrected a report that overcounted miscarriages in one section of the Pfizer documents, "they are right to have early and often called attention to signals about this issue overall," Kory noted in an Aug. 20 substack.com analysis.

WorldTribune.com cited Wolf and data reported on her Daily Clout website in an Aug. 17 report that was flagged by Facebook as false information.

Turning to data on whether the Covid vaccines are having an impact on birth rates, Kory noted that, "although birth rates can vary from year to year, and have small peaks and valleys within the year, you don’t typically see large decreases suddenly from one month to the other, in numerous countries around the world. This data is even more horrifying."

Kory reported that he obtained some of the data from Peter Imanuelson’s Substack called the Freedom Corner with Peter Sweden.

In Stockholm during the first quarter of 2022, Imanuelson noted that birth rates plummeted by 14%:

"It is a drastic and remarkable reduction beyond the usual. We have never seen anything like this before, that the bottom just falls out in just one quarter" Gunnar Andersson, professor in demographics at Stockholm University told the newspaper Dagens Nyheter.

Kory noted: "As someone who has been witness to massive censorship, much of it voluntary (i.e self-censorship), what the Professor says next is completely expected and in-line with what is now almost two years of many leading (cowardly) scientists, researchers and physicians who have willingly avoided making conclusions that might put the vaccines in a bad light, despite the immensely disturbing data on COVID vaccine toxicity screaming from VAERS, the life insurance industry, and disability statistics since the roll-out."

"It correlates exactly in time with the mass vaccination program in April, May last year. People understood that the lockdowns ended and now we had to go out in the world again. Demographists in other parts of Europe see the same timing."

The professor's interpretation is that lockdowns ended and vaccines were provided, "thus giving everyone the freedom to start newly re-exploring the world instead of making babies?" Kory wrote. "Although I find this almost too absurd to explore, I will say this: Sweden never really had any significant lockdowns. I am so sick and tired of hearing idiotic alternative explanations for truly disturbing data on the vaccines. Things like 'anyone can put a report into VAERS', or 'working age people died at higher rates because of unemployment and deaths of despair.' Yet in 2021, lockdowns were over, unemployment rates were at historic lows, and drug overdoses have been on a fairly constant (but not precipitous) rise for years. I could go on, but you know what I am talking about, the constant explaining away of 'inconvenient truths,' with my personal favorite (favorite is not the right word), the explosion in articles about Sudden Adult Death Syndrome in trying to explain all the healthy, active young people dropping dead all over the world."

Kory concluded: "Too many young people dying, too many becoming disabled, too many pregnancies resulting in fetal or neonatal death as above, and now we find out that if we continue with this vaccine obsession, they will not be replaced. This is a humanitarian catastrophe heaped atop the one caused by dangerous gain-of-function research. When will the world wake up to this rapidly unfolding horror? For those of us who know what is going on, it is hard not to feel helpless as we are forced to watch increasingly apparent and widespread needless death. But we will continue to try to get these truths out despite the massive censorship and propaganda overwhelming the globe. We have a moral and ethical obligation and take that responsibility seriously no matter what befalls us. Stop the vaccines, now. And if we can’t stop them, we must try to convince everyone we know to no longer agree to get vaccinated. Their lives and our future depend on it." 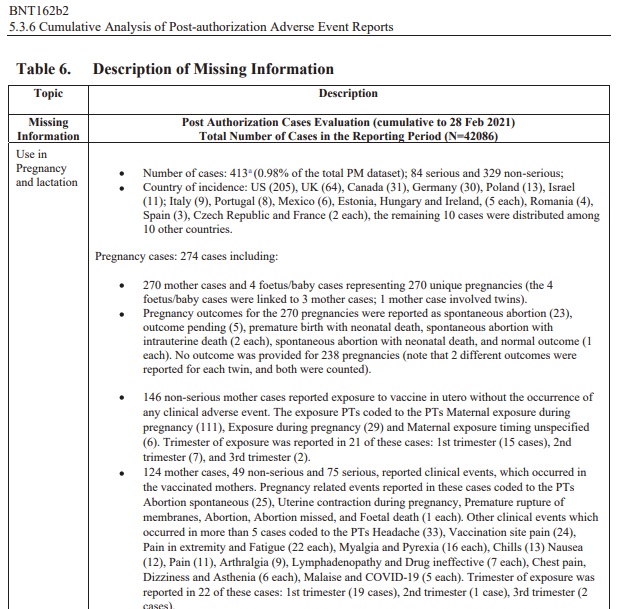 jabcan by N/A is licensed under Screen Grab N/A