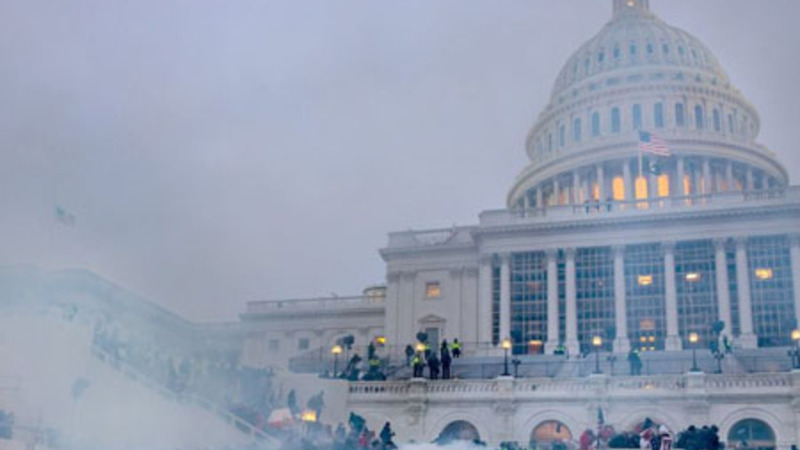 In only three years between 2018 and 2021, the number of surveillance cameras in China rose from 350 million to 580 million, from one for every four Chinese citizens to one for every two.

Cole Richards, Executive Vice President and Chief Operations Officer at Voice of the Martyrs, reports this technology has served to make possible the mass incarceration of over 1.5 million ethnic, religious, and political minorities.

Well, that's communist China. Such an Orwellian nightmares could happen in the Far East but not here in the United States, right?
Wrong.

Similar technology was used in the case of Stephen C. Randolph of Kentucky, who is now one of the 423 defendants charged in the Capitol breach, DOJ documents show, according to a WorldTribune report on April 26.

After using the facial recognition technology to nail Randolph’s identification, the FBI then went undercover to try to obtain incriminating statements, Rowan Scarborough noted in an April 25 report for The Washington Times, citing a DOJ affidavit.

“The FBI may have used biometric technology, perhaps classified systems, to identify other Capitol suspects but did not disclose the use in court documents,” Scarborough noted.

The Chinese Communist Party has classified as crimes foundational aspects of the faith that are inseparable from what it means to be and live as a Christian, Richards explains.

Meeting for worship and training up children are examples of infractions that are detectable by the cameras. As such, facial recognition surveillance is becoming increasingly connected to what it means to be a Christian in China.

“Our Chinese Christian brothers and sisters live with the understanding that attending a church service or visiting a fellow Christian’s home even once can lower their ‘permanent’ digital record,” he said.

China’s surveillance cameras are either controlled by or accessible to the CCP, which uses the images to punish citizens not only for crimes but also for what it deems subversive acts that oppose its power and control. The camera’s and related computers and software recognize faces and log unfavorable actions and associations against individuals' "social index scores."

A low score can be grounds for denying anything from a bank account or loan to housing and educational opportunities.

A Chinese Christian leader recently told Voice of the Martyrs he exhorts his church members to steadfastness by telling them, “Of course the government is watching you, and even listening to you in your own home! So make sure that what they are seeing is a true disciple of Christ!”

As such, the technology in China takes Peter’s temptation on the night of Jesus’ arrest to a new level of daily struggle. While Jesus was mocked and spit on before the council that tried him, Peter, his leading disciple, awaited outside where a servant girl saw him and recognized him as one of Christ’s followers.  In fear, he famously denied any association with Jesus three times before the cock finished crowing. Then he wept bitterly (found in Matthew 26).

Such Faustian choices between deeply-held beliefs and personal flourishing have already found their way to the Western world and the United States in the form of the American Left’s program of cancel culture, de-platforming, career destruction, retraction of basic services such as flight travel, and, increasingly, federal investigation and legal prosecution.

Up to now, the means of such repression has surfaced increasingly through the ubiquity of cell phone cameras that have given enormous reach and power to those with a
penchant for doxxing or humiliating anyone who exhibits, even temporarily, a behavior or views deemed at odds with the one’s own political values.

Such technology in the hands of government has faced widespread opposition in the U.S. on both sides of the political aisle, but it has found a mixed reception in municipalities, where the actual policing occurs.

Some cities in the U.S. like Boston and San Francisco have banned the technology from law enforcement while others like New York have embraced it.

However, at the Federal level, the Department of Justice through the FBI has used facial recognition in what some are concerned is political targeting, against January 6th protestors who entered the Capitol building, whether they engaged in vandalism or entered peacefully after police opened the doors.

Whether in the immediate or more distant future, one thing is certain, the technological means of transferring such power to the government and of transforming the United States into a totalitarian socialist style surveillance state both exists and is at hand.

Of even greater concern is the existence of a vocal segment of the population that appears to approve of the use of such technology against politically opposed citizens.