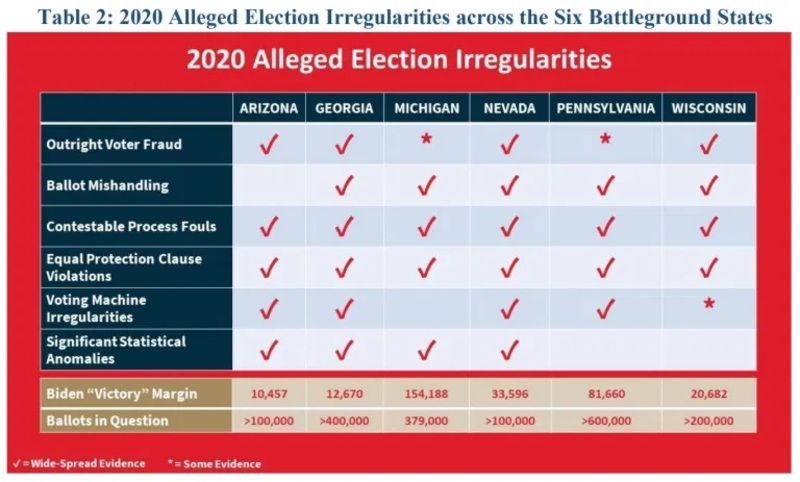 As a comprehensive audit of Maricopa County's 2020 ballots continues in Arizona, former White House trade adviser Peter Navarro suggested Georgia may well be next in line for an audit.

On Saturday’s episode of Steve Ban­non’s War Room, Navar­ro examines elec­tion fraud receipts in Georgia, where he explained that over 600,000 illegal ballots were cast in a race reportedly decided by about 12,000 votes.

In his interview with Bannon, Navarro stated how and why Georgia will be the next state to conduct a complete foren­sic ballot audit.

In the January release of Volume 2 of his 2020 election report titled "The Art of the Steal", Navarro noted:

"The Democrat Party and its political operatives, with the unwitting aid of “useful idiots” from the Republican Party, stole the presidential election from Donald J. Trump.

Prong One dramatically INCREASED the amount of absentee and mail-in ballots in the battleground states. Prong Two dramatically DECREASED the level of scrutiny of such ballots – effectively taking the election “cops” off the beat. This pincer movement resulted in a FLOOD of illegal ballots into the battleground states more than sufficient to tip the scales from a decisive legal win by President Trump to a narrow and illegitimate alleged “victory” by Joe Biden.

The Democrat Party relied primarily on legal means such as legislative and rule changes at the state level to implement its Grand Strategy and thereby achieve its illegal outcome. However, at times, political operatives advancing the Democrat Party’s Grand Strategy also bent, and sometimes broke, the laws and rules of that which is most sacred to our American public – our election system.

Key methods used by the Democrat Party to strategically game America’s presidential election included changes in the law approved by State Legislatures; rule changes and new guidance initiated by Secretaries of State or other election officials; court rulings and interventions; and the aggressive use of so-called “public-private partnerships” to commandeer and manipulate the election process in key Democrat strongholds such as Wayne County, Michigan and Dane County, Wisconsin.

Prong One of the Democrat Party’s Grand Strategy used seven basic gambits to dramatically INCREASE the flood of absentee and mail-in ballots: relaxing mail-in and absentee ballot rules; sending absentee or mail-in ballots or applications for such ballots to every voter (universal mailing); increasing both the legal and illegal use of drop boxes; ballot harvesting; and the use of corrupted voting machines.

Democrat Party operatives frequently hid behind the shield of the Chinese Communist Party (CCP) virus and resultant pandemic to further their goals of boosting the absentee and mail-in ballot counts in the key battleground states.

Soros money helped fund efforts to change election laws and rules through instruments such as referenda. Soros and his network of organizations such as the political action committee “Secretary of State Project” also helped to elect puppet Secretaries of State in Michigan (Jocelyn Benson) and Pennsylvania (Kathy Boockvar) who would play instrumental roles in bending or breaking election rules and thereby advancing the Grand “Stuff the Ballot Box” Strategy. Zuckerberg money – nearly half a billion dollars – helped engineer what was effectively a hostile Democrat Party “publicprivate partnership” takeover of what should otherwise be a nonpartisan election process in key Democrat strongholds such as Wayne County, Michigan and Dane County, Wisconsin.

Useful idiots for the Democrat Party included Georgia’s Republican Governor Brian Kemp and Republican Secretary of State Brad Raffensperger who entered into a Consent Decree that dramatically INCREASED the number of absentee and mail-in ballots while dramatically DECREASING the rejection rate of such ballots. Republican state legislators who voted for the bills that would help the Democrats advance its Grand Strategy likewise were unwitting dupes.

By implementing its Grand “Stuff the Ballot Box” Strategy, the Democrat Party and its political operatives have strategically gamed one of the most sacred elements of American democracy, our election system. This was brass knuckle politics played at the highest level which has delivered a brutal punch to the nose of the American people and a vicious kick to the groin of American democracy.

That the Democrat Party and its operatives have, up to this point, gotten away with their Immaculate Deception and Art of the Steal, represents a signal failure of the media, Republican state legislators, other Republican government officials across the battleground states, the US Congress, and our judicial branch of government at both the state and federal levels.

Volumes 1 and 2 of the Navarro Report – The Immaculate Deception and The Art of the Steal – together make the strong case for a full investigation of the election irregularities and strategic gaming of our political process that in all likelihood have led to a stolen presidential election. Any such investigation must begin immediately as this nation simply cannot risk the inauguration of a president who will be perceived by a large segment of the American people as illegitimate."