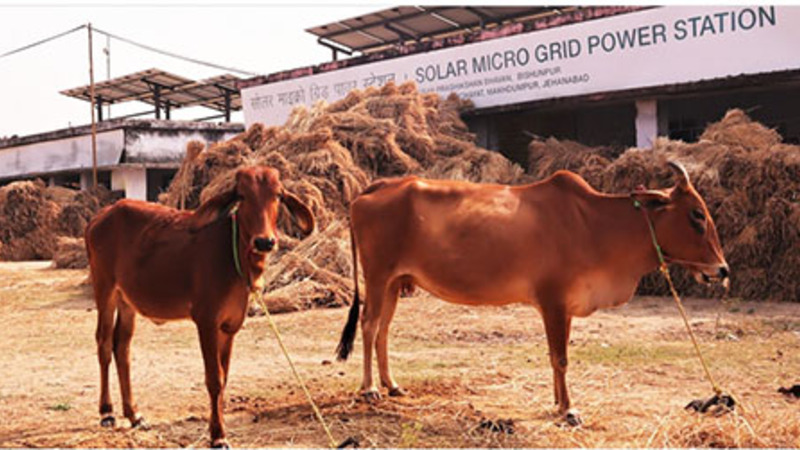 solarcows by Manish Kumar is licensed under Mongabay N/A
Dharnai village's solar micro grid power station is now a shed for cattle.
by WorldTribune Staff, May 16, 2022

In 2014, Greenpeace brought solar power to Dharnai, India, promising to make the small village “energy independent” and a model for the rest of the country.

Eight years later, the solar micro grid power station constructed by Greenpeace in Dharnai is not only offline, but is being used as a cattle shed, a report said.

When the solar micro-grid was first built, some villagers expressed optimism while others protested it saying they didn’t want “fake” electricity, according to the Mongabay-India news outlet. At the time, Nitish Kumar, the chief minister of Bihar state, applauded the project and told locals that coal power would diminish over time while solar power would always be around.

In July 2014, Greenpeace claimed Dharnai was the first village in the state of Bihar to run entirely on solar energy.

But the project quickly collapsed. Batteries became overused, causing the entire grid to fall into disrepair, Mongabay-India reported in December.

Today, paddy straw is piled up around the solar micro-grid, which is now being used to shelter cattle, according to Mongabay-India. In addition, solar panels are covered in dust and rods supporting the green tech are heavily-rusted.

“In the first three years, it worked well and people were using it. But after three years the batteries were exhausted and it was never repaired,” Ravi Kumar, a local shopkeeper, told Mongabay-India. “So now, while the solar rooftops, CCTV cameras and other infrastructure are intact, the whole system has become a showpiece for us.”

“No one uses solar power anymore here,” he continued. “The glory of Dharnai has ended.”

Dharnai was eventually connected to the region’s coal-powered grid in 2016, giving villagers access to a much cheaper and more reliable power source, Mongabay-India reported.

Patrick Moore, who co-founded Greenpeace in the 1970s, said the Dharnai experiment is merely one of many failed attempts by environmental groups like Greenpeace to “green” the developing world.

“It’s the same thing that’s happened a lot across Africa: goody two-shoes comes in and builds them a small solar facility,” Moore, currently the director fot he CO2 Coalition, told The Daily Caller News Foundation. “Then, pretty soon the battery wears out and it just doesn’t get repaired and they don’t know what to do because they don’t have any expertise. There’s plenty of those stories.”

Moore departed Greenpeace in the 1980s after he said the group lost touch with its original purpose,

solarcows by Manish Kumar is licensed under Mongabay N/A