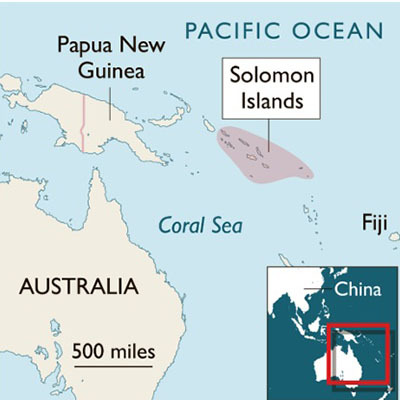 Sol2 by N/A is licensed under Internet N/A
A potential Chinese air-naval base on Isabell Province in the Solomon Islands would allow China to isolate Australia from its main ally, the United States.
by WorldTribune Staff, April 19, 2022

Recent disclosures have indicated that China has since 2020 sought to establish a military base in the Solomon Islands, heightening the concerns of the United States and allies Australia and New Zealand about growing Chinese influence in the region.

Solomon Islands Western Province Premier Christian Burley Mesepitu said in a statement "the agreement is too ambiguous and open to too many interpretations. This is a real risk."

Mesepitu said he made it clear to the government of Solomon Islands Prime Minister Manasseh Sogavare that the Western Province did not agree with the security pact and would not allow its land and assets or people to be used for its purposes.

Mesepitu concluded: "What we really need now to maintain peace and stability in this country is the decentralization of governance through the federal system of government and for an early national general election to enable our people to choose new leaders to take us forward in our quest for lasting peace, unity and prosperity."

Both the Chinese and Solomon Islands governments have denied that China seeks a military base in the Solomons.

However, in a blow to Sogavare’s and China’s credibility, disclosures on April 7 on the Australian website “news.com.au” indicate that Sogavare has for almost two years entertained Chinese interest in building an actual base on Isabel Province, one of the islands in the Solomons chain.

"The revelation was in the form of a Sept. 29, 2020 letter to Premier Leslie Kikolo from Rong Qian, president of the AVIC International Project Engineering Company," Richard Fisher reported for Geostrategy-Direct.com on April 12.

Australian Foreign Minister Marise Payne said Australia was "deeply disappointed" and continued to seek further clarity on the terms of the agreement, noting the signing had been announced by the Chinese government.

"We are concerned about the lack of transparency with which this agreement has been developed, noting its potential to undermine stability in our region," she said in a statement on Tuesday evening.

The Biden administration said a high-level U.S. delegation including Indo-Pacific coordinator Kurt Campbell would travel to Honiara this week to discuss concerns about China, as well as the reopening of a U.S. embassy.

"Deliberate attempts to inflate tensions and mobilize rival camps are also doomed to fail," Wang, the Chinese spokesman, said on Tuesday, when asked about the U.S. officials' scheduled visit.

Honiara's parliament was told by Douglas Ete, chairman of the public accounts committee and lawmaker for East Honiara, that Chinese foreign ministry officials would arrive next month.

"The PRC foreign affairs is heading to Honiara in the middle of May to sign multilateral agreements and cooperations with the Solomon Islands government," he said, referring to China.

Ete said the visit meant the two nations would increase cooperation on trade, education and fisheries, but added that he rejected the idea of the Solomons signing a security pact with China to set up a military base.

Sogavare told parliament the proposed security agreement would not include a Chinese military base.