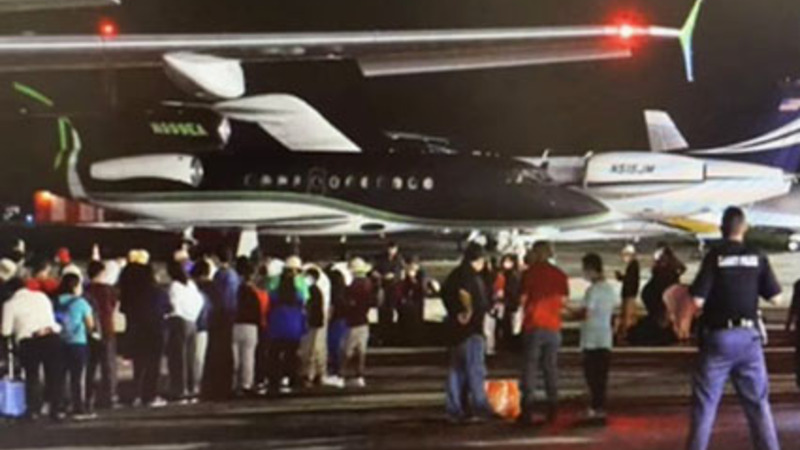 mflights by N/A is licensed under Video Image Twitter
The Biden administration has practically since day one been using secret nighttime flights to distribute illegal aliens throughout the U.S.
by WorldTribune Staff, December 27, 2022

Team Biden’s secret nighttime flights trafficked unaccompanied alien children from Texas to destinations across the country, according to records from the Department of Health and Human Services (HHS) obtained by Judicial Watch.

The records include a May 15 email from a person whose name is redacted to an unnamed person at MVM Inc’s Office of Refugee Resettlement (ORR) Transport DFW (Dallas Fort Worth) Command Center detailing charter flights.

“These shocking documents forced out by a Judicial Watch lawsuit show the Biden administration effectively trafficking unaccompanied alien children, dropping them off in city after city like items for delivery,” said Judicial Watch President Tom Fitton. “The Biden open borders crisis is resulting in the most massive child and human trafficking operation ever.”

The records also include a May 13, 2021, email thread from a redacted person at MVM Inc. to RF1Badging@rf1.us [likely Response Force 1] and others regarding an Administration for Children and Families’ (ACF) Office of Refugee Resettlement (ORR) transport of minors from Kay Baily Hutchison Convention Center in Dallas on Friday, May 14, 2021, before dawn, at 3 a.m.

RF1 Badging then replies, “Please be advised that the following UCs [Unaccompanied Children] … does not match in our system.” He then proceeds to list the details of nine children.

Also in this thread is an email from an individual at Culmen International stating that one of the minors is “not cleared to travel.”

The records include a list for a charter of 36 children from Honduras, Guatemala, Mexico and El Salvador. A handwritten note on the spreadsheet says: “Dallas to Tennessee Air Charter Flight 5/14/2021.” The record notes that the children are to be transported to these shelters: La Casa de Sidney, Lincoln Hall Boys’ Haven, Children’s Home of Kingston, Children’s Village Shelter, and Cayuga Center TFC. It indicates three of the minors are “reunifications.”

In a May 26, 2021, letter to HHS Secretary Xavier Becerra and Department of Homeland Security Secretary Alejandro Mayorkas, Tennessee Sens. Marsha Blackburn and Bill Hagerty, along with Tennessee Rep. Chuck Fleischmann, detailed their concerns regarding unaccompanied minors:

"We write to seek information on the Department of Health and Human Services (HHS) management of unaccompanied alien children (UAC) in federal custody and the facilities used to house them. We are particularly concerned about recent reports regarding the use of Chattanooga, Tennessee, as a central location for resettling UACs in the United States.

"There are media reports that, within the last week, at least four planes carrying UACs landed at Wilson Air Center in Chattanooga, Tennessee, before swiftly boarding the children onto buses and transporting them to multiple cities across the southeastern United States for apparent resettlement, with zero transparency regarding what was happening. For months, reports have detailed how thousands of children are being housed in neglectful conditions at mass shelters operated by HHS under a veil of secrecy. We are deeply troubled by the lack of transparency and accountability regarding the conditions that HHS is subjecting these children to."