How Xi Jinping prevented a challenge to his now unchallenged power 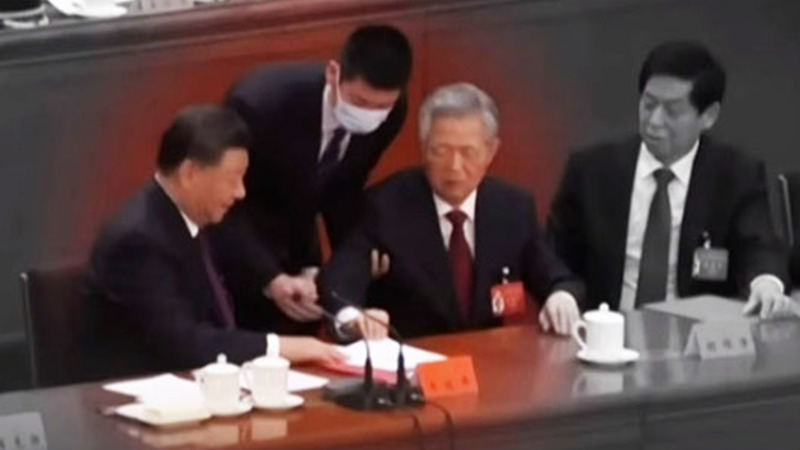 hupaper3 by N/A is licensed under Video Image N/A
Just before he was escorted out, Hu Jintao, right, reached for a paper but was prevented from taking it by CCP leader Xi Jinping.

In a dramatic scene which unfolded on live TV during the Chinese Communist Party’s 20th Party Congress on Oct. 22, former Chinese President Hu Jintao was escorted out of the proceedings in a humiliating display that showcased internal tensions within the ruling communist regime in Beijing.

The drama came shortly before Xi was to be declared CCP secretary for an unprecedented third term.

CCP meetings like the one on Oct. 22 in Beijing are usually tightly scripted and planning is made years in advance to assure the meetings project an image of unity among leaders.

China analysts said the expulsion of Hu was most likely the result of his planning to vote against Xi’s third term and his removal was intended to promote the fiction that Xi’s consolidation of power was unanimously supported by the party, noted security correspondent Bill Gertz in a report for the Washington Times.

The apparent purge of Hu came as a surprise to many, Gertz added.

Days earlier, during his speech opening the 20th Party Congress, Xi paid homage to past Chinese leaders and their versions of Marxism-Leninism with Chinese characteristics. That included a reference to Hu’s variant described in the speech as a “scientific outlook on development.”

Under the old "rules," it was Jiang Zemin who was given the authority to choose Hu, “and thus Jiang gave us the rule of Xi,” Geostrategy-Direct.com contributing editor Rick Fisher noted.

“And so, it would have been Hu who would have chosen the successor for Xi, but Hu's public shaming/shuttling off the stage likely signals that Hu will not be making that choice, a major move that implies Xi's dictatorial power is complete.”