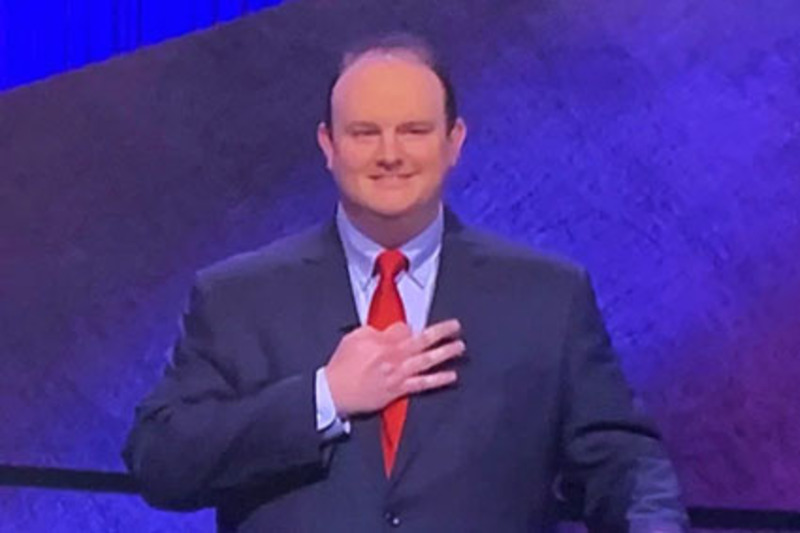 But these were no ordinary three fingers, according to the woke mob. Outraged snowflakes asserted that what Donohue was really doing was flashing the "white supremacist" sign.

Now, more than 450 former Jeopardy contestants have signed an open letter published to Medium in which they complain: "A recent contestant has caused concern among Jeopardy! viewers for two separate occurrences, and we as former contestants feel the need to speak out against the messaging that these choices communicated — either intentionally or unintentionally — by the contestant Kelly Donohue and, implicitly by association, the producers of Jeopardy!"

(It was not reported how many of the 450 Jeopardy contestants won 3 or more times, so sore-loser syndrome is also in play.)

Some viewers were triggered by Donohue's specific finger positions, which, according to the open letter, "whether intentional or not, resembled very closely a gesture that has been coopted by white power groups, alt right groups, and an anti-government group that calls itself the Three Percenters."

The open letter calls on Donohue to publicly apologize "for the ramifications of the gesture he made" and disavow "any connection to white supremacist doctrines," and urges the show to "address Kelly's behavior" and take measures to ensure that "future mistakes of this magnitude never make it on air."

Donohue wrote on Facebook: "Many of the great champions of old had a little signature hello they would do on-screen when being introduced by Johnny Gilbert," he wrote. "I decided to count my victories. That's a 1. That's a 2. That's a 3. No more. No less. There wasn't a hidden agenda or any malice behind it. Had I managed to repeat as champion, you'd have been treated to a 4."

While the woke mob is focused on three fingers, here are some other "white supremacist" signals involving three fingers they might want to cancel.

Activists in Myanmar (Burma), Thailand, and Hong Kong use the Three Finger gesture to show support for the pro-democracy movement. Sorry, activists, that is "white supremacist" behavior according to American leftists.

What about Three Fingers mountain in Washington state? Whoa, that is one big "white supremacist" sign for the woke mob to fret over.

And Mordecai Brown must be removed from the baseball Hall of Fame. Since his nickname was "Three Finger," every pitch Brown threw was a sign of "white supremacy" in the woke lexicon.

In his previous Jeopardy episodes, Donohue had displayed one finger and two fingers. Undoubtedly, there is one finger many millions of Americans would like to display to the woke mob.

jprdy by N/A is licensed under Screen Grab N/A