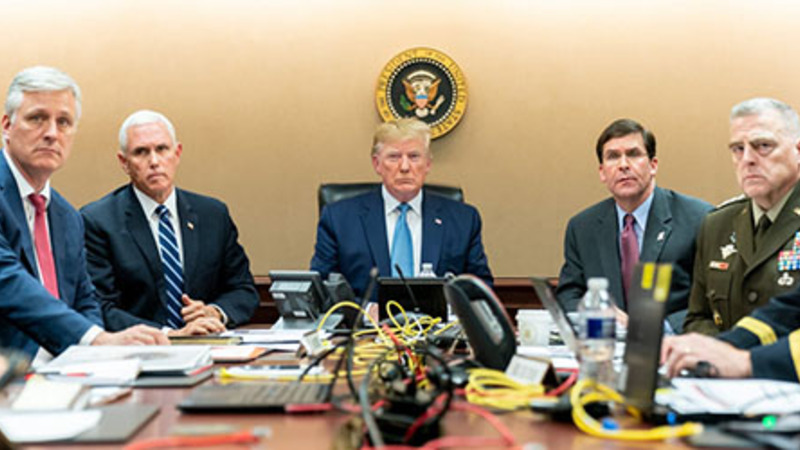 deterrence by Shealah Craighead is licensed under Public Domain White House
With Donald Trump in the White House, 'Bad actors like Putin simply knew that they had to restrain themselves or deal with the consequences.'
by WorldTribune Staff, March 4, 2022

John Ratcliffe and Cliff Sims, who were senior intelligence officials in the Trump administration, agreed with 62 percent of respondents in a Harvard-Harris poll who said Russia would not have invaded Ukraine if Donald Trump was still in the Oval Office.

"Trump not only successfully deterred Russia from acting against Ukraine, he effectively deterred a lot of bad behavior across the planet," Ratcliffe and Sims wrote in a March 3 op-ed for The Federalist.

When Donald Trump was president, however, "Russia did not seize territory from any of its neighbors," Ratcliffe and Sims noted.

When Trump ordered the killing of Iran's top general, Qassem Soleimani, the "world took notice," Ratcliffe and Sims wrote. Soleimani "had operated with impunity throughout the Middle East until the U.S. military sent two Hellfire missiles through his vehicle."

During the 2020 campaign Biden released a statement condemning the attack as a “hugely escalatory move” that brought us to “the brink of a major conflict across the Middle East.”

As Ratcliffe and Sims pointed out: "This, of course, proved to not be the case, but it illustrated Biden’s unwillingness to do what it takes to establish credible deterrence."

How was Trump successful in containing Putin? Why was he so successful at spreading peace elsewhere?

"We believe the long answer begins with these ten ways that Donald Trump projected American strength and kept the bad guys in check," Ratcliffe and Sims wrote:


Ratcliffe and Sims continued: "This principle of deterrence applies across the globe, which explains why the Chinese military has sent a record number of airplanes into Taiwan’s air defense identification zone since Biden took office.

"To the specific case at hand, Trump was much tougher on Russia than the media have led people to believe, while Biden has been far softer.

"Trump deployed such aggressive sanctions against Russia that President Obama’s Secretary of Defense Robert Gates called them the toughest in history, and he withdrew from one-sided treaties that hamstrung the U.S. while Russia violated the terms.

"Biden has taken the opposite approach, appeasing Putin by handing him his top two geopolitical priorities on a silver platter. He unconditionally extended the New Strategic Arms Reduction Treaty, allowing Russia to continue building tactical nuclear weapons while constraining our ability to modernize. And while Trump imposed sanctions to stop Russia’s Nord Stream 2 pipeline in its tracks, construction was allowed to resume when Biden took office."

"Vladimir Putin’s appetite for expansion did not wane during the four years Trump was in office, and the world was not just miraculously a safer place. Bad actors like Putin simply knew that they had to restrain themselves or deal with the consequences. In nearly every way possible, President Biden has weakened the United States and our allies and empowered Putin. As a result, Russia is on the march, even as the Ukrainian people have inspired the world with their courage and resilience. And in the wings, America’s greatest threat – Xi Jinping’s China – waits, and watches."