In Moldova, fair and open election; U.S. came under attack from within 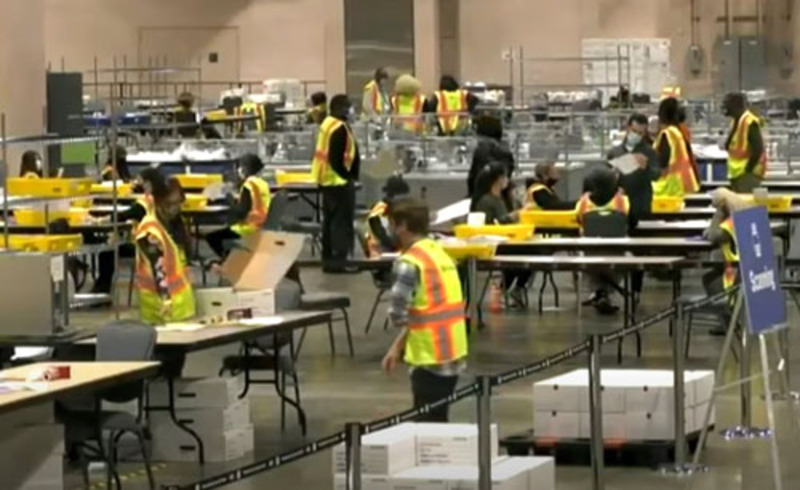 “A country cannot subsist well without liberty, nor liberty without virtue, nor virtue without citizens”, — Rousseau

Having started a "dirty revolution", globalists and progressives are destroying both democracy and America.

There were elections in two countries happening almost simultaneously: in the USA and in the Republic of Moldova. As one might expect, the elections in Moldova were fair, transparent and open. And, on the contrary, the elections in the USA were accompanied by numerous falsifications, fraud, manipulation, cooperation of one of the parties with criminal structures, and threats of mass pogroms in the event of an "unfavorable" outcome.

This is not a fantasy novel or a satirical pamphlet. This is a sad reality: the stronghold of liberal democracy has sunk to the level of ...not even Russia or Belarus, but Venezuela, Zimbabwe and Kyrgyzstan.

No one can predict the development of events in the foreseeable future. But in any case, the main losers have already been distinguished — the democratic system, as it is, and the United States.

True democracy is based on the idea of the Social Contract. According to Rousseau, “Then from the public enlightenment results the union of the understanding and the will in the social body; and from that the close cooperation of the parts, and, lastly, the maximum power of the whole. Hence arises the need of a lawgiver”.

In my book Agony of Hercules or a Farewell to Democracy (Notes of a Stranger) I wrote that such "conception of the democracy formed the basis of the subsequent political philosophy: John Dewey’s idea of a fruitful and friendly competition between all citizens for the sake of the common wellbeing; Robert Dahl’s concept of the representative democracy as various social groups of population striving for a consensus; Peter Singer’s formula of the peaceful and fair compromise. Joshua Cohen believed that a well-reasoned dialogue can solve all the problems. Amartya Sen focused on striving and the need of law-abiding citizens to shape social values by sharing relevant information.

Democracy, as Dahl argues quite reasonably, is by definition better than all other systems of government, because it gives a maximum freedom and extensive civil rights to an individual, imposing however a strong moral responsibility.

Let’s point out the core aspect all of these theories share: They emphasize the importance of “moral responsibility”.

People may differ in opinions on how to solve a particular problem, which problems are primary, and which of them are secondary. However, they should originally strive for a common prosperity, respect opinions of opponents, and follow decisions of the majority. Well-being of the state should be their ultimate common goal, and any deliberate attempt to damage it should be deemed as an obvious crime".

Take away the concept of “moral responsibility”, and democracy will turn into an ugly parody of itself. This is exactly what happened before our eyes.

Intimidation, falsification and fraud are inevitable parts of totalitarian regimes, but they are fatal to the very idea of democracy, because they inevitably turn democracy into kleptocracy. In such a case, the Social Contract becomes a fiction.

What is the point of going to the polling station, if your vote would be thrown into the trash or stolen? If state institutions are losing the trust of ordinary people, then what is their value in principle? For the purpose of feeding a giant bureaucratic apparatus?

The Constitution is turning into a meaningless word, the civil rights — into a piece of paper. On paper, the Stalinist constitution was also the fairest in the world.

Personal responsibility of people, commitment all social groups and parties to freedom, honesty and transparency form a basis of a democratic system. Otherwise, democracy, as it is, turns into a decoration of totalitarian regimes with their pseudo-democratic institutions, as it happened in Russia, Turkey, Iran, Venezuela and Zimbabwe. 'Democracy is when the Democrats win', Russians joke today. Unfortunately, it's hard to argue.

Up until now the American democracy was a role model for the world. Even those who hated it were forced to reckon with it.

In Belarus, Burma and Iran, masses of people believed in the "light from the Potomac Hill". And who would want to imitate America today, being of sound mind and firm memory? It turned out that the king was naked. And, on the contrary, authoritarian regimes received a gift that they could not have dreamed of in their most cheerful dreams: America, which always so intrusively taught them about democratic freedoms and human rights, made their own sacred values a mockery. It is the same as if a church clergy, led by the Pontiff, came to St. Peter's Basilica to publicly desecrate it. If the oldest and the most powerful democracy failed, what can we expect from the relatively young and much weaker democracies in Europe, such as Germany, Italy or Spain, not to mention Latin America, Asia and Africa?

American globalists, neo-Marxists and progressives have devalued the very concept of democracy. And what is even sadder, they blew up the U.S. as a state from within.

The USA is a young country with a relatively short history. It was conceived and created by the Founding Fathers solely as the grandiose project of a free society that prioritizes equality, social success and civil rights. The "American tree" does not have deep and branched roots, like the countries of Eurasia. It has no other dominant paradigm, except Democracy, freedom and equality, no other cultural or national epic, mythology and archetypes, from which one can draw strength at critical moments of history for the country.

America does not have a glorious past, like Italians or Greeks do. It had no magnificent empires, as Britain, France, Russia or Spain had, or triumphant breakthroughs in philosophy, such as British rationalism, the French Enlightenment, or the Italian Renaissance. America doesn’t possess the heritage of one of the greatest cultures, like Italy, Austria and the Czech Republic, or deep religious rootedness, as in Poland. Yes, today the Swedish society looks helpless and confused, losing power in their own country. But behind the Swedes there are the mighty shadows of Odin, the Vikings, Gustav Adolphus and Charles XII, and they can breathe new strength into the tired nation. Who could imagine a hundred years ago that the persecuted, humiliated, deprived of all kinds of military skills, European Jews would win victories over much stronger enemies and create one of the most successful states of our time? Who could imagine that a fragmented, poor China would become a superpower in just a couple of decades? Historical memory gives wings, hope and self-confidence, and, perhaps, the image of Joan of Arc will help the French, that have been demoralized by postmodern culture, restore the faith in themselves.

Destroying the very idea of democracy, the globalists and progressives are depriving America of its origins of strength, leaving behind only a disoriented and fragmented consumer society.

Samson without his hair ceases to be Samson. Blinded and humiliated, staying without its democratic core, America would become an easy prey for the modern Philistines. And this is the main goal of the current "dirty revolution".

Born in Moscow, Alexander Maistrovoy is a journalist based in Israel and the author of “Agony of Hercules or a Farewell to Democracy (Notes of a Stranger)”, available at Amazon and Barnes & Noble.