Christian author and public intellectual Eric Metaxas had his show permanently banned by YouTube on Wednesday. Metaxas called it a “grotesque attack on free speech,” and describes the show as emboldened.

Likening it to a hit job, the show’s producer, Chris Himes, said they were “whacked.” Metaxas called it “a huge financial hit” and financially “devastating.”

“When you are speaking the truth at a time such as this you cannot be daunted by such things,” Metaxas posted on Facebook. “None of my heroes ever were and by God's grace I never will be. We trust that what we are doing is right and we will not be silenced.”

Metaxas is the author of bestselling biographies on Deitrich Bonhoffer, a famous Nazi resister, Martin Luther, and William Wilberforce, the British Member of Parliament who worked tirelessly to end of the international slave trade in the nineteenth century. Other titles include Miracles (2014) and, Fish Out of Water: A search fro the meaning of life (2021). He is also the host of the New York event Socrates in the City, which hosts prominent intellectuals such as author Malcom Gladwell and Cambridge mathematician John Lennox.

YouTube policy allows no more than three strikes in a 90 day period. After delivering the initial warning, censors at the big tech giant appear to have sifted through show material from months earlier in order to issue the third strike just days before the 90-day window closed.

The show, which had 215,000 subscribers on YouTube tried to avoid further strikes after the initial warning by removing content.

“We even took down everything that we thought might offend them in the Communist Party, and they still knocked us off totally,” Metaxas said. “They didn’t just take us off for two weeks or something. It’s an extraordinary thing. We’re living through strange times.”

Describing the cancellation as a “hatchet job,” Himes explained in an email that the action “seemed more punitive and subjective than rational. Why did it take 2 months to issue the violation?”

“We were a few days from one of the warnings expiring,” Himes said. “So they whacked us.”

The cause, YouTube claims, was a radio interview criticizing vaccine passports and earlier shows raising concerns about the November 3 election fraud. The April video that resulted in the fourth strike was titled, “Naomi Wolf Sounds the Alarm on Vaccine Passports and a Social Credit System in America.” The interview “violates our medical misinformation policy,” YouTube said.

The three earlier violations were for advancing “false claims that widespread fraud, errors, or glitches changed the outcome of the U.S. 2020 presidential election,” according to YouTube.

Metaxas’ show is now available on Rumble. A second YouTube channel, “Eric Metaxas” which posts primarily his television appearances and has 4,500 subscribers, is still active.

The move follows a year in which numerous prominent conservatives have been banned from multiple social media platforms.

The move also portends an ominous pattern that conservative commentator Steven Crowder predicted in 2019 as a coming “purge on YouTube” that would be based not on current content but on past content previously deemed benign.

“The biggest concern to me — and I'm not entirely sure about this, but I’m pretty confident — is that the new policy, which we will only know once it is in effect, could apply retroactively.” Crowder predicted.

Metaxas, who described their work and the cause of the banning as “because we are over the target,” issued the following unapologetic response on Facebook: 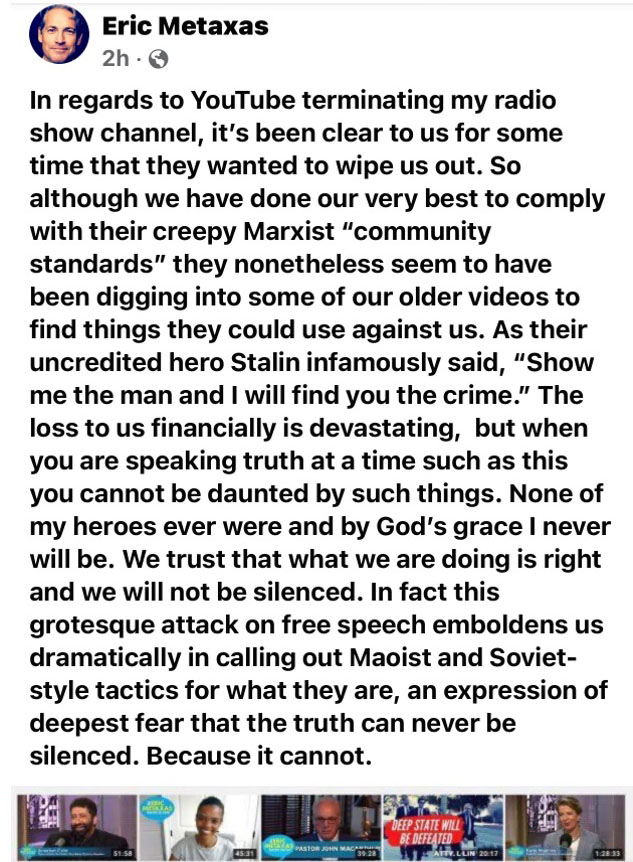 metax1 by N/A is licensed under Screen Grab N/A