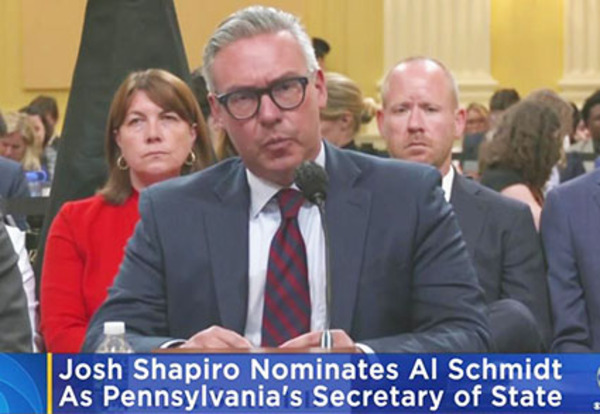 Do you think there will ever be an on-the-level election in Pennsylvania ever again? Try this on for size:

A new radical progressive governor (who ran as a moderate) from the party that has made election fraud an art in the Keystone State has tabbed a Philadelphia Republican who fully embraces Democrat framing of Trump supporters as domestic terrorists, enthusiastically touts mail-in balloting and was awarded a medal by Joe Biden at his Soviet-style theatrical ceremony marking the two-year anniversary of Jan. 6 to be the commonwealth’s new top elections official.

Oh, and notorious Republican Maricopa County, Arizona vote counter Stephen Richer, the man who presided over the outrages in that state's 2020 and 2022 elections, is ecstatic over the move, saying he considers the new appointee to be a "friend, role model and fellow traveler."

There is no mystery as to what is going on here. An entrenched Uniparty is working to assure that the American people will never again be allowed to vote it out of power. The Pennsylvania Capital-Star reported Jan. 5:


Al Schmidt, the current president and CEO of the Committee of Seventy, will be nominated to oversee the Pennsylvania Department of State, which handles elections, as secretary of state, Gov.-elect Josh Shapiro announced Thursday morning.

“Al Schmidt has a proven track record of defending our democracy, protecting voting rights, and standing up to extremism — even in the face of grave threats,” Shapiro, a Democrat, said in a statement. “And I am proud to nominate him to be Pennsylvania’s next secretary of the commonwealth.”

As many have warned to no avail: If you don't stand up to the shenanigans, they will become hard-wired into the machinery of government. Just take a quick look at what a total lack of electoral integrity has put into office this month. Highly dubious 2022 election results have given Pennsylvania a gravely mentally impaired man as a U.S. senator who appears to be heavily under the sway of his wife, who first entered this nation as an illegal alien.

And Arizona has as its new governor a woman who in her position as secretary of state was allowed to certify her own controversial "victory" after a systemically flawed Election Day process filled with chaos that her office was charged with preventing.

As he was being sworn into office, United States Senator John Fetterman did not seem fully aware of his surroundings.

As she was being sworn into office, Katie Hobbs could not stop giggling like a schoolgirl when asked if she would uphold and defend the Constitution.

Democrat @KatieHobbs was unable to take the oath of office this morning without stammering and laughing through it. She also banned reporters from attending. #AZGov

This is how countries die. How can America survive having these kind of people installed in the very highest "elected" offices in the land via shady means that a vast number of citizens find impossible to regard as credible?

And now, because the fraud-tainted 2020 presidential election was allowed to stand, things are only going to get worse. Painting Trump supporters as criminals will get a Republican far in government today. As noted, Shapiro has specifically praised Schmidt for standing up against “extremism”:

Al Schmidt has a proven track record of defending our democracy, protecting voting rights, and standing up to extremism – even in the face of grave threats.

I know he'll continue the hard work of preserving and strengthening our democracy as my Secretary of the Commonwealth. pic.twitter.com/OpZOvNLwFc

In his testimony before the Democrat-controlled House Jan. 6 committee, Schmidt performed the following dutiful tasks:
The big-box media love never stops for a Republican such as this. Here’s The Philadelphia Inquirer on Jan. 5 “reporting” that Schmidt was about to be awarded the Presidential Citizens Medal by Biden the next day as part of the wooden commemorative propaganda the White House continues to pump out about Jan. 6.:


Schmidt, a Republican, will be one of a dozen people honored by Biden at a White House ceremony marking two years since the Jan. 6, 2021, insurrection at the U.S. Capitol.

Biden will give one of the country’s highest civilian honors to Schmidt, other public officials who resisted pressure from then-President Donald Trump to overturn the lawful 2020 election results, and several law enforcement officers who defended the Capitol during the riot fueled by Trump’s lies.

Remember, this Stalinist language is being used to celebrate the new top election official in Pennsylvania. And here is Schmidt on Dec. 9, lamely flashing his “Republican” label in an op-ed for the website Smerconish.com to avidly promote the permanent use of mail-in ballots:

With new legislative sessions starting around the country next year, there’s an opportunity to reset the debate on election reform. For leaders and elected officials of both major parties to embrace voting by mail will give us our best chance yet to improve our election laws to maintain voter access while preserving election integrity. Partisans should have every interest in doing this. But it’d also be good for voters, not to mention our democracy.

#3.I'm grateful to democracy defenders who lead with truth & courage, even when taking on powerful voices in their own party. Folks like @Liz_Cheney, @Commish_Schmidt, @speakerbowers, @stephen_richer, @billgatesaz & so many others who endure a heavy load in service to democracy. pic.twitter.com/NqRO4jfZgc

Richer, who oversaw the flagrant election irregularities that allowed shaky Democrat candidates to defeat America First Republican nominees in The Grand Canyon State last November, has publicly stated that he considers Schmidt to be a "friend, role model, and fellow traveler":

Congratulations to my friend, role model, and fellow traveler @Commish_Schmidt on his appointment as Secretary of the Commonwealth of Pennsylvania. https://t.co/dB3m3nufHk

Thank you @statesunited for including me in today’s bipartisan panel discussion of state-led pro-democracy efforts with @JocelynBenson, @keithellison, @stephen_richer, and @GovCTW, and moderated by @JLydgate. pic.twitter.com/zkxqmtN3Uq

Watchdog website Influence Watch has an informative dossier on States United Democracy Center. RINO and other ruling establishment names abound. Former George Soros asset Caroline Chambers serves as a "Senior Advisor" to the group. From her bio at the organization’s website:


Before joining States United, Caroline spent nine years leading domestic policy advocacy at the Open Society Foundations and grant making by the Open Society Policy Center. She served in the White House as the first director of confirmations for President Barack Obama, overseeing Senate approval of more than 600 nominees, and as deputy director of the White House Council on Youth Violence under President Bill Clinton.

This is the terrain that Richer and his “fellow traveler” Schmidt trod. Schmidt is also President & CEO of the Committee of Seventy, a Philadelphia organization that claims to be a “nonpartisan” advocate of good government in the City of Brotherly Love. Nothing could be further from the truth.

In December, the Committee announced it was partnering with the Lenfest Institute, a Facebook and Google-funded “journalism” outfit with clear financial ties to Big Money globalist progressives, in what amounts to a “get out the vote” campaign in the city. “The Committee of Seventy is thrilled to be a grantee of the Lenfest Institute's Every Voice, Every Vote initiative,’ said Al Schmidt, the President & CEO of the Committee of Seventy,” a release from the organization reads. WorldTribune documented Lenfest’s loaded progressive ruling establishment ties last February:


The Lenfest Institute is funded by a major $40 million gift from the late cable giant, Gerry Lenfest, and it has also received funding from the Knight Foundation, Facebook, and Google.

The Knight Foundation is a frequent collaborator of notorious leftist “philanthropic” powerhouse organizations such as the Ford Foundation and George Soros’s Open Society Foundations.

Leftist philanthropist Pierre Omidyar's Democracy Fund is also listed as a major financial backer. Let’s get back to that fawning Philadelphia Inquirer article for a second. More from our February 2022 report on Lenfest:


H.F. “Gerry” Lenfest purchased The Philadelphia Inquirer and donated it to the Lenfest Institute for Journalism, placing Philadelphia at the epicenter of a national effort to protect and transform local news in the digital age.

So Schmidt is CEO of a Philadelphia organization funded by and partnered with Lenfest, the de facto owners of The Inquirer. This would mean Schmidt and the largest daily newspaper in Pennsylvania are basically in business together. Funny how that’s left out of the “straight news” article praising Schmidt to the skies for defending democracy against insurrectionist Trumpian domestic enemies. This is how tyrannies have operated since the beginning of human governance.

Control the major communications sources. Control the pathways to positions of authority. Monopolize power. The more one digs into Schmidt’s background, the worse things get. Yet another chummy Philadelphia media profile, from Philadelphia magazine in 2009, reveals comfortable Swamp employment featuring Bill Clinton and the Deep State:

When notorious longtime anti-conservative Republican Sen. Arlen Specter, one of the most destructive American elected officials of the past 50 years, died in 2012, Schmidt declared that he had regarded him as a "mentor":

“He was special, both personally and professionally,” observed Schmidt, noting that Specter was both a neighbor and the first major elected official to provide the aspirant Republican controller with an endorsement.

Noting the chasm that often exists between public perception and private characteristics, Schmidt said, “everything you heard about [Specter] was true, up-close and personally – he was consistently independent.”

This is the man who will be running elections in Pennsylvania.

This is what happens when good Americans decide it’s not worth the hassle to fight election fraud.

Good luck thinking your vote will matter in 2024.

alschmidt by N/A is licensed under Video Image N/A