Is it racist to report how 'migrants' to Joe Biden's Open Borders America are being treated? 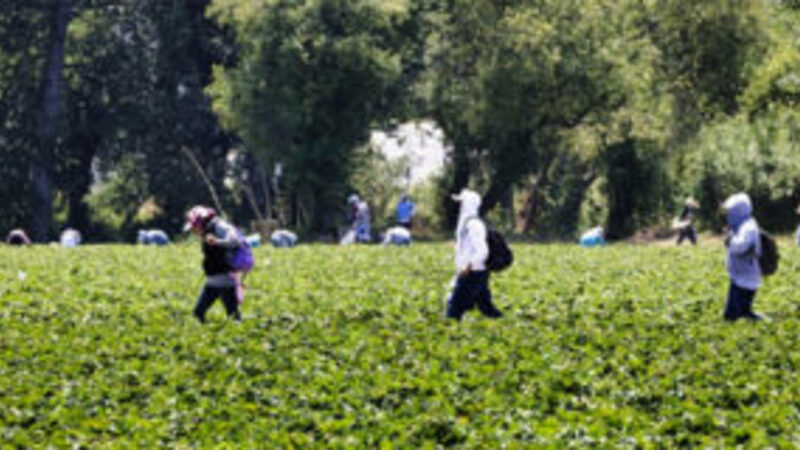 Migrants by N/A is licensed under Screen Grab N/A
'Unfortunately, few farmworkers are willing to talk about the sexual harassment they face.'

The profound suffering experienced by real human beings due to massive unchecked illegal immigration continues to bubble to the surface. Recent news reports make clear that children are increasingly being exploited in greater numbers.

It poses a question. How long can “you’re racist if you oppose this” leftists and cheap labor-addicted corporate employers cling to any shred of moral high ground on this issue as the broken bodies become harder to conceal?

Curiously, it is progressive sources who frequently best reveal the nightmare, all while being wholly unable (or unwilling) to draw basic logical conclusions on how to end it.

Let’s start south of the border, where “migrants" making their way to Joe Biden's Open Borders America are being harshly preyed on by criminal gangs.


Migrants and civil society organizations are on alert following a spate of threats, extortion attempts and attacks in recent months by organized crime groups on shelters along the US-Mexico border.

On Tuesday, it was announced that the Migrant Embassy shelter, located in Tijuana’s beach area, about 50 meters from the border wall that goes into the sea, had to close due to these threats.

The most interesting takeaway is that crime cartels are in full control of border-crossing points utilized by illegals:


Hugo Castro, founder of the S.O.S. Migrant Coalition, to which the shelter belongs, told the media that members of criminal groups have been troubling migrants and coordinators for at least four months.

“The shelter has fallen prey to threats, extortion attempts. Criminals who present themselves as those in control of the area even entered at night, and demanded $200 from each of the migrants as a fee for letting them try to cross the border,” he said.

The activist said that the criminals “perhaps assume that all migrants, at some point, are going to cross the wall through that area,” which is controlled by people traffickers in collusion with organized crime.

Once they make it into the U.S., things actually get worse for many illegals. Ann Lopez, executive director of the Center for Farmworker Families in California, penned a horrifying Nov. 29 article at Lookout Santa Cruz, a local community news site. Rape and death are too often the unwelcome supplements to the pittance paid out to illegal alien farmworkers in the Golden State:


Unfortunately, few farmworkers are willing to talk about the sexual harassment they face. Studies by the Southern Poverty Law Center (SPLC) and University of California Davis show 60% to 80% of farmworker women are sexually harassed, groped or outright raped in the field. Unfortunately, few women farmworkers are willing to talk about these experiences. They are often shamed into thinking the experience was somehow their fault. Or, because most of the farmworkers in Santa Cruz County are undocumented — up to 83% — they fear deportation if they report their supervisors.

Lopez makes it crystal clear that their illegal status makes these women helpless:


But again, most farmworkers won’t file a complaint or talk about the experience because they’re threatened with losing their job, deportation, or blacklisting and shame.

Sexual assault is but one life-destroying hazard facing the illegal alien worker:


They are also regularly exposed to environmental toxins in the form of pesticides — which our community’s agricultural giants regularly use on crops, particularly strawberries, blackberries and raspberries. Scientific studies verify the devastating impact pesticides have on farmworkers — and on their children.

It’s one thing to read the studies and quite another to meet and know these workers and their families, as I do. I regularly meet the children of farmworkers who have cancer, attention-deficit/hyperactivity disorder, autism spectrum disorder, learning disabilities and birth defects.

Meet some of the people the U.S. Chamber of Commerce says are making “better lives” for themselves by toiling for Big Agriculture:


One family I know with a 7-year-old daughter with leukemia makes trips to Stanford every month for treatment. The child takes powerful daily cancer drugs. The disease is stealing her childhood and adding untold pain to her family’s already hardscrabble life.

Another family has a teen boy whose left ear never developed. One single mother who worked during the pregnancies of her two youngest sons now has two ADHD boys who are often literally out of control. She works in the field all day and comes home to chaos regularly.

But children are not just being harmed via their parents’ unspeakable work conditions. Increasingly in America today, they are being made to slave away in these conditions themselves. In a shocking Nov. 9 news release, the Department of Labor announced it had found that a major food sanitation company for meatpackers had “at least 31 children” working under extremely perilous conditions:


“[T]he complaint was prompted by an investigation by the department’s Wage and Hour Division that discovered that [Packers Sanitation Services Inc. LTD ]had employed at least 31 children – from 13 to 17 years of age – in hazardous occupations. The jobs performed by children included cleaning dangerous powered equipment during overnight shifts… Investigators also learned that several minors employed by PSSI – including one 13-years-old – suffered caustic chemical burns and other injuries.”

Sanitation cleaning at meatpacking facilities is considered one of the most dangerous jobs in modern America. PSSI has a track record of maimed and dead workers to back that contention. “PSSI had the 14th highest number of severe worker injuries in the country out of 14,000 workplaces despite employing only 17,000 workers,” according to findings by the National Employment Law Project, NBC News reported in 2021. “Every other dangerous workplace to make the list employed between 44,000 and 1.6 million workers domestically.” The company itself is doing very well. “Packers brings in more than $800 million a year in revenue,” Bloomberg News reported in 2017. That number has only grown in the years since.

"He comes to your home & brings it [Fake Social Security Card]"pic.twitter.com/pBKorAsvZI


“When I got here [to the United States], I began studying, and then working. I went to school for six months. From a year ago, I began working… I go in [to work] at 4PM and get out at 2AM,” an underage female migrant said.

It can’t be emphasized enough: None of this would be possible if not for the abject greed of American employers who know they are likely to face no serious legal consequences for their despicable working relationship with this evil.

Equally infuriating is how leftist sources highlight the phenomenon but rather than even trying to understand that turning off the spigot of cheap labor these unethical employers rely on is the only way to dismantle this shadow American underworld, they use these human tragedies to support "reforms" that would guarantee it continues to thrive. Progressive ruling establishment newspaper

The Los Angeles Times on Nov. 29 reported on a car wash in the L.A. metropolitan area that was paying illegal alien workers as little as $7 an hour as they put in 10-hour shifts:


In the latest crackdown against wage theft in Southern California, state officials had announced that morning that they would penalize the Hawthorne Boulevard carwash operator more than $900,000 for paying workers far below the minimum wage and denying them overtime and rest breaks.

Over a four-year period, 15 workers were allegedly paid a daily flat rate as low as $70 for eight to 10 hours of work, at a time when the state minimum wage went from $10.50 an hour to $14 an hour for businesses with 25 or fewer employees.

Once again, the problem is identified:


An estimated 90% of carwash workers are undocumented, a status that makes them particularly vulnerable to retaliation if they complain, said Flor Rodriguez, [Clean Carwash Worker Center’s] executive director.

The cruelty is described in great detail:


Clean Carwash investigators say many workers are required to report to the job early in the morning but are not paid until they wash their first car, sometimes hours later. And they toil long hours in the heat, are exposed to harsh chemicals and are often denied lunch or rest breaks.

And... not one mention of the need to enforce federal immigration laws or go after employers specifically for hiring illegal alien labor.

It is a narrative that must collapse, no matter how much money is standing behind to prop it up. The ugliness of massive illegal immigration is unmasking itself with every passing day. When the face of an exploited and abused worker is that of a child, all that “jobs that Americans won’t do” blather is fully proven to be the empty noise made by ruthlessly selfish people that it has always been.

Migrants by N/A is licensed under Screen Grab N/A