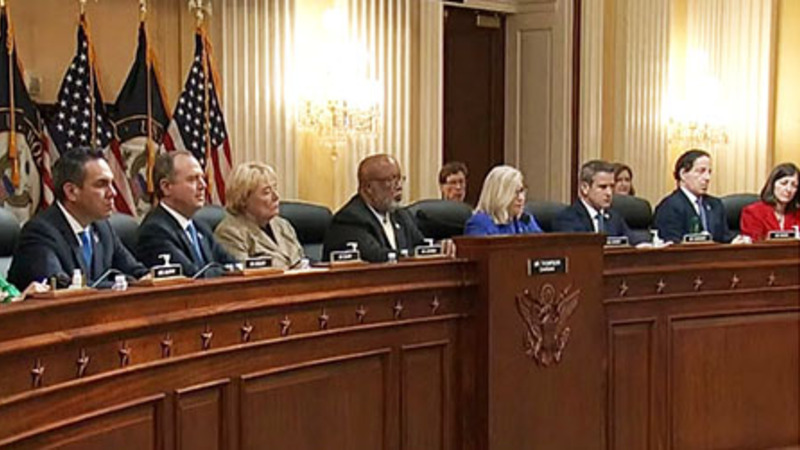 demshow by N/A is licensed under Video Image N/A
The Select Committee on Jan. 6
by WorldTribune Staff, December 20, 2022

During its final hearing, the House Select Committee on Jan. 6 on Monday wrapped up an 18-month investigation with four criminal referrals to the Department of Justice against former Republican President Donald Trump. The committee is comprised of Democrats and two anti-Trump Republicans.

In a voice vote, the committee unanimously recommended for the DOJ to prosecute Trump for obstruction of an official proceeding, conspiracy to defraud the United States, conspiracy to make a false statement to the federal government, and inciting, assisting or aiding an insurrection.

"What is a conspiracy to defraud the United States?

"Intel officials conspiring together to lie about the Lap Top From Hell by claiming it was 'Russian disinformation' so you can suppress the First Amendment and steal an election.

"Conspiracy to defraud the U.S.: Hire Russians to lie that your opponent 'colluded' with Russia to steal an election, when you actually did it, use it to spy on your opponents, and then when you lose the election illegally leak lies to keep spying and try to overturn the election

"Conspiracy to defraud the U.S.: Erect an illegitimate committee to push propaganda and call half the country domestic terrorists by claiming you are investigating an event, when in fact the entire purpose of the committee is to cover up the true events of that day.

"Conspiracy to defraud the U.S.: Violate the Constitution by unilaterally changing the methods of elections to stuff the ballot box, stop the count when fraud wasn’t enough, then keep counting until you get the result you wanted and pretend Joe Biden got 81 million votes… Then cancel anyone who questions the stolen election, throw them in prison with no due process, and use the FBI to censor anyone who even jokes about it.

"In sum, this unelected regime is a conspiracy to defraud the United States. Every single day."

The committee also recommended for the House Ethics Committee to make a formal inquiry into House Minority Leader Kevin McCarthy and other Trump allies, Republican Reps. Jim Jordan of Ohio, Scott Perry of Pennsylvania, and Andy Biggs of Arizona. All refused to cooperate with the Jan. 6 investigation.

Hours before the committee's hearing, Trump re-posted a video on Truth Social of him telling protesters via Twitter on Jan. 6 to "go home."

Trump also pointed the committee to newly-unbanned tweets that he posted on Jan. 6, 2021:

"These two very important tweets have been uncovered now that my account, which was shut down by the FBI, has been reinstated!"

I am asking for everyone at the U.S. Capitol to remain peaceful. No violence! Remember, WE are the Party of Law & Order – respect the Law and our great men and women in Blue. Thank you!

Please support our Capitol Police and Law Enforcement. They are truly on the side of our Country. Stay peaceful!

demshow by N/A is licensed under Video Image N/A