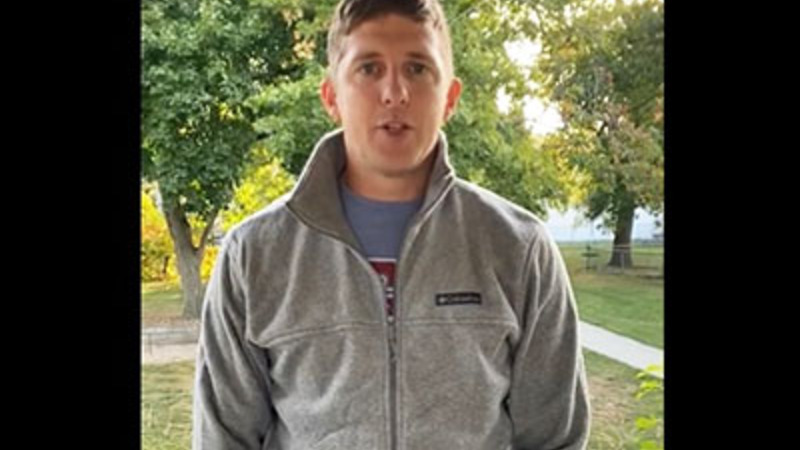 After completing his three-month prison sentence, a former West Virginia state lawmaker was released from the Washington, D.C. gulag on Oct. 21 and reiterated his assertion that the 2020 election was stolen.

Derrick Evans, a former member of the West Virginia House of Delegates for District 19, said that after "18 months of legal battles and now three months of being held captive as a political prisoner by the illegitimate Biden regime, I boldly stand before you today to still claim that the 2020 election was stolen."

Evans was sentenced on June 22 to three months incarceration followed by three years of supervised release for participating in the Jan. 6, 2021 protest at the U.S. Capitol. He was also subject to a $2,000 fine and $2,000 in restitution.

Evans pleaded guilty to Impeding, Obstructing, or Interfering with Law Enforcement During A Civil Disorder.

In a Truth Social post, Evans shared something he said he learned while in the D.C. gulag: “People have asked what is one thing I learned while being held captive as a political prisoner by the illegitimate Biden regime … They have made the BOP (Bureau of Prisons) as woke as all other agencies. The only dental work you can get is pulling your tooth if it’s an emergency, but you can get ‘free’ transgender medicine paid for by the taxpayers.”

"The flames of liberty which burn inside me today are much stronger than they were three months ago when I self surrendered to prison. Anyone who thought this experience would break me or silence me has set themselves up for disappointment.

"This experience has only made me stronger and more eager to fight for freedom, the preservation of liberty and to defend our God-given rights which are protected by the U.S. Constitution.

"To the God-fearing Christians across this country, find joy in knowing that God is calling and preparing his people. Join me as we put on the full armor of God and prepare for the spiritual battle that has yet to come.

"To everyone that has prayed for our family, donated and sent letters and books to prison, thank you.

"This experience has not been easy but your prayers and support have helped me in more ways than you will ever know.

"I do ask that you please continue to pray for my fellow J6 political prisoners who are still being politically persecuted.

"As for me, I am going to spend the next few days just being lazy, focusing on my family and making up for lost time.

"Thank you guys for your time and your understanding. God bless you and and God Bless the United States of America.”

It was good to sleep in a real bed last night with an actual pillow.

God bless my fellow J6ers who are still being held captive as political prisoners. It was hard. It’s still hard, but we must ensure the preservation of Liberty for our children. #Jan6Justice #jan6 #Trump pic.twitter.com/xcz93s1upD — Derrick Evans (@DerrickEvans_WV) October 22, 2022