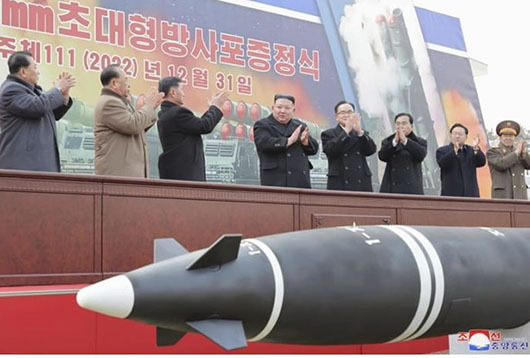 Meanwhile, U.S. President Joe Biden has denied a statement from South Korean President Yoon Suk-Yeol that the United States is interested in planning for nuclear weapons use in defense of South Korea.

On Jan. 1, 2023, Kim was reported by North Korean state media as saying, "In a situation where South Korea has become doubtlessly an obvious enemy, the mass production of tactical nuclear weapons is important and necessary and there is a need to exponentially increase the number of nuclear warheads.”

Such a rocket could have a range of over 500 kilometers and is large enough to deliver a tactical nuclear warhead to most of South Korea, or from ships could also be used to attack Japan.

Artillery rockets are less expensive to produce than guided ballistic missiles and could be produced rapidly to deliver an “exponential” increase in North Korean nuclear weapons.

Then on Jan. 1, 2023, North Korean state media showed Kim and his daughter reviewing a large room with an estimated 26 Hwasong-12 (HS-12) liquid fueled ballistic missiles that have an estimate range of 6,000 kilometers, enough to reach some targets in Alaska.

But in the face of increased North Korean nuclear threats, on Jan. 2, President Joe Biden missed an opportunity to affirm an American intent to defend its South Korean ally.