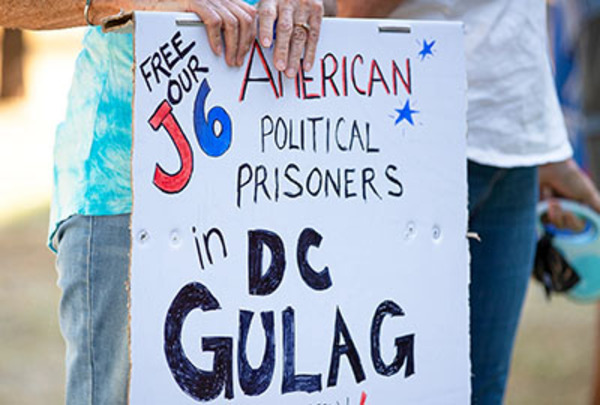 As hundreds of Jan. 6 detainees remain in jail without bond, independent media and Republican members of Congress have documented the brutal treatment the detainees are subjected to at the D.C. jail, also known as the "American Gulag."

Former New Mexico State University law professor David Clements noted that prosecutors are "scared to death" of proceeding to trial against the detainees.

"Just finished a live chat with our political prisoners. The injustices being imposed by the judges and prosecutors are unheard of.

"My message. Fight. Take every case to trial. Get it before a jury.

"These bogus charges will unravel under the truth and an impartial fact finder.

"Remember, the real criminals were the FBI informants and undercover agents that created the false flag to begin with.

"These prosecutors and judges are scared to death of going to trial.

"F--k everyone who supports Trump," was one of the vile social media posts made by Kathleen Landerkin, the current Correctional Training Facility (CTF) Deputy Warden at the Department of Corrections in the District of Columbia, who assists in overseeing day to day operations, inmate transportation, and case management.

"Though she holds a position of power over January 6 inmates, Landerkin continued to spout anti-Trump and anti-Republican rhetoric on her Twitter until she deleted her account earlier today," National File reported on Saturday.

Alex Brusewitz, the CEO of XStrategies, conducted an advanced search of Landerkin's Twitter posts by typing “Trump” and dozens of anti-Trump tweets came up such as “The Trump family is a crime family and the GOP in [sic] complicit,” and “Trump is doing more damage to this country then [sic] foreign terrorists ever have.”

Droves of anti-Trump & anti-republican tweets from the Deputy Warden of the DC Jail where all of the protesters from J6 are being held in AWFUL conditions.@awkathyjo is responsible for GRAVE human rights violations and she must be held accountable immediately.

While the Left and its Big Media allies mostly ignore social media posts such as those made by Landerkin, every scrap they can dig up from Jan. 6 detainees is used to press the narrative of a "violent insurrection."

That includes a benign post which included "lol" which set off U.S. District Judge Amy Jackson.

Earlier this month, Jackson read aloud some of Russell Peterson’s posts about before she sentenced the Pennsylvania man to 30 days imprisonment. “Overall I had fun lol,” Peterson posted on Facebook.

“The 'lol' particularly stuck in my craw because, as I hope you’ve come to understand, nothing about January 6th was funny,” Jackson added. “No one locked in a room, cowering under a table for hours, was laughing.”

dcgulag by N/A is licensed under Screen Grab N/A