jamestrump by N/A is licensed under Internet N/A
New York Attorney General Letitia James has been trying to pull Donald Trump into court for years.
Analysis by WorldTribune Staff, September 23, 2022

For years, New York Attorney General Letitia James has made getting Donald Trump her No. 1 priority.

James campaigned on that priority four years ago and has insisted several times since then that she would somehow find a way to charge Trump criminally.

And even with her re-election chances in November looking more grim by the day, James continues to pursue Trump and his family.

On Wednesday, James held a press conference to announce she had filed a lawsuit alleging Trump misevaluated his properties among other tax-related infractions.

"James’s lawsuit is not criminal; rather, civil. But the end result would be a serious ding to the Trump family’s business dealings. If she were to prevail, the named Trump entities would be barred from buying land or obtaining loans in New York for five years," Washington Times columnist Cheryl K. Chumley noted on Thursday.

"She campaigned on that four years ago," Trump told Fox News host Sean Hannity Wednesday night. "It was a vicious campaign and she just talked about Trump; 'we're going to indict him, we're going to get him'. She knew nothing about me. I never heard of her."

James at one point insisted: "We're definitely going to sue [Donald Trump]. We're going to be a real pain in the ass."

In another instance, James declared then-President Trump to be unfairly seated in office, saying she will "never be afraid to challenge this illegitimate president," despite her party's own criticism of those who challenge presidential legitimacy.

In the interview with Hannity, Trump said his company is fastidious about stating its fiscal position, praising the value and worth of his portfolio of properties, which include his namesake hotels, a Charlottesville, Virginia winery, and golf clubs in Doral, Florida, Doonbeg, Ireland, and elsewhere.

"We've been going over this for years, and I actually thought because our values are really high, the company is great. I built a great company to take places like this," he said.

Trump added he first believed the state of New York wanted to settle with him, but said no one should pay something – "even if it's a small amount – if you're not guilty."

The article opens: “The American public’s views of former President Donald J. Trump have remained remarkably stable across a number of different measures in recent months.”

Democrats will continue to the "get Trump" strategy "just enough to make voters run scared from Republicans this November, and again in 2024," Chumley added. "By then, the whole Great Reset globalist vision to cripple America with China-like economic policies will have had time to grow and spread. By then, America should be sufficiently cleansed of its deplorable conservative politics."

As Trump Jr. put it: “The bulls— Des witch-hunt continues!”

Chumley added: "That’s the only way Democrats can win elections. They know it, the Trumps know it, the American people know it." 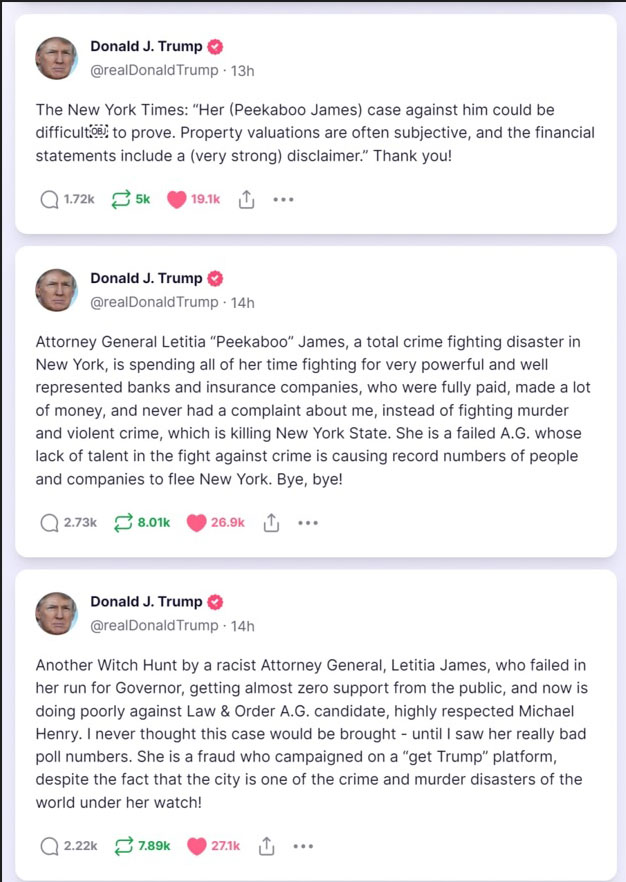