Hoffman by N/A is licensed under abc7chicago.com N/A
View of the vacant Plunkett Furniture building in Hoffman Estates.
by WorldTribune Staff, September 23, 2022

In a 2018 letter, the Obama Foundation admitted to storing both “classified and unclassified” documents at an abandoned furniture store and warehouse in the Chicago area.

The Obama administration had informed the National Archives and Records Administration (NARA) that the documents would be converted into digital form for use in the Obama library. The digitization process has yet to take place and the paper documents remain at the Hoffman Estate warehouse, according to a suburban Chicago newspaper, DailyHerald.

The letter of Sept. 11, 2018 can be found at Obama.org and was signed by Robbin Cohen, Executive Director of the Obama Foundation.

"Obviously, there were no raids on Hoffman Estates from the FBI to secure the classified documents. Nor did the DOJ National Security Division trigger a criminal investigation of President Obama for holding documents, particularly classified documents, against the interests of the NARA while they 'digitized them;' a process, which again should be noted, never even began," Sundance at The Conservative Treehouse noted.


A massive volume of paperwork, electronic data and artifacts will find a temporary home at the old Plunkett Home Furnishings store on Golf Road in Hoffman Estates. As many as 120 employees will be brought in by the National Archives and Records Administration to sort through the material, which ultimately will be part of the Obama Presidential Center.

The National Archives employees will organize, digitize and preserve the contents of what is sometimes called the "president's attic," said John Laster, who directs the Presidential Materials Division at the agency and has toured the Hoffman Estates site.

The space at 2500 W. Golf Road was leased in February by the General Services Administration.

The Obama Foundation letter can be seen here.

Here is one excerpt from the letter: 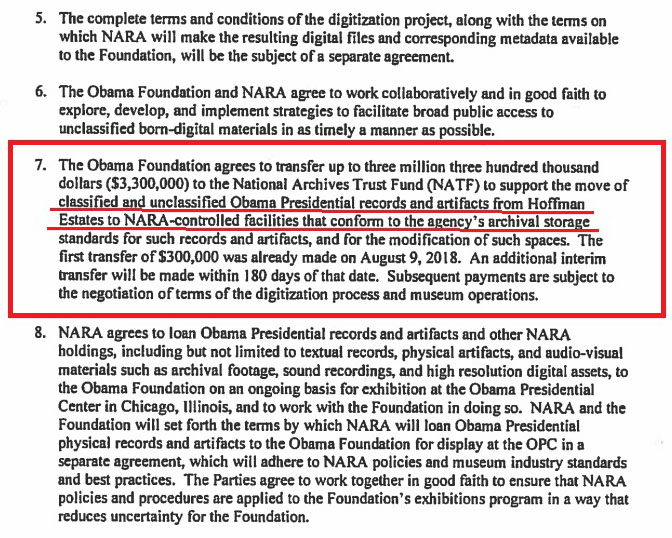