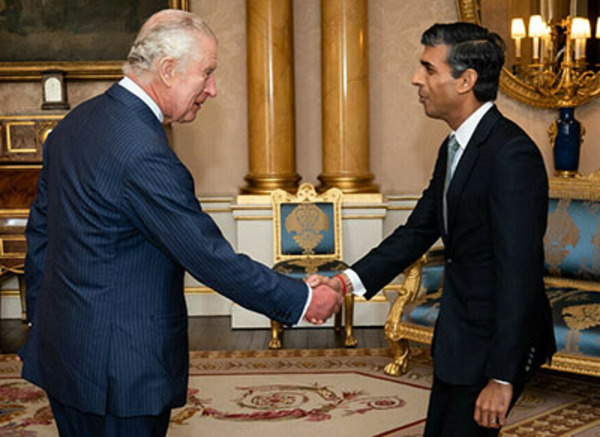 On Tuesday, Rishi Sunak was installed by King Charles as Great Britain's third prime minister of the year.

Globalists could not be happier as both Sunak and Charles have deep, longstanding ties to Klaus Schwab’s World Economic Forum.

Charles is a major supporter of Schwab's “Great Reset” agenda and even touted the onset of the Covid pandemic "as the perfect opportunity to overhaul the world’s economy and usher in a 'fourth industrial revolution' that transforms government, business, and daily life," Frankie Stockes noted in an Oct. 27 analysis for National File.

"A longtime attendee at the WEF’s Davos summits, King Charles has for decades been an outspoken champion of the group’s global climate agenda, which includes population reduction on a massive scale," Stockes noted.

As with Canadian Prime Minister Justin Trudeau, Sunak, 42, fits in nicely with the WEF's plan to install young leaders who are in lockstep with the Great Reset, which calls for a complete makeover of society run by globalists who want to dictate how the world is run from the top down.

Sunak is a former Goldman Sachs banker with a fortune even bigger than that of King Charles. As prime minister, Sunak has vowed to implement the WEF’s climate initiatives, among other Schwab-backed policies.

In a World Economic Forum video posted to the group’s YouTube channel in November of 2020, Sunak, then a Chancellor in Boris Johnson’s government, spoke of his work with the WEF on their global climate overhaul, which they’re using to “reshape our economy.”

According to Sunak, he’s been “working closely with governments around the world” to implement the WEF’s “critical” climate overhaul agenda, which includes “net-zero” carbon emissions.

"Now, in 2022, the arrival of his climate agenda on Downing Street has been described as a 'green coup,' and his WEF-aligned policies are so extreme that they’ve even been declared a threat to British national security," Stockes noted. "The tight controls on carbon emissions championed by Rishi Sunak, King Charles, and the WEF have been a frequent centerpiece of population reduction plots."

Sunak is also a supporter of Central Bank Digital Currencies and is seen as a key player in the quest to form a cashless society, where all financial transactions are tracked by global governments.

Sunak’s father-in-law is a co-founder of the Indian tech giant Infosys and Sunak’s wife owns a stake in the company as well, to which Sunak owes a large chunk of his fortune.

"Infosys is closely affiliated with the World Economic Forum on the global level and the tech firm has even helped to implement a social credit score system in communist China," Stockes noted.

Sunak had earlier this year opposed Liz Truss becoming head of the ruling Conservative Party and lost. Truss went on to become Prime Minister and form the shortest-lived government in the UK’s history, lasting only six weeks.

Truss resigned after her tax-slashing budget supposedly sent the British economy into chaos and caused the markets to plunge.

"Her supporters have accused shady financial oligarchs, like the World Economic Forum and their associates, of using their financial influence to leverage the markets into freefall and force Truss out of office, unhappy that they didn’t get Rishi Sunak as Prime Minister the first time around," Stockes wrote.

When Truss stepped down, it forced a vote for a new Conservative Party leader, and Rishi Sunak was installed, beating out Penny Mordaunt and the party’s failed former leader and Prime Minister Boris Johnson.

chazsunk by N/A is licensed under Video Image N/A