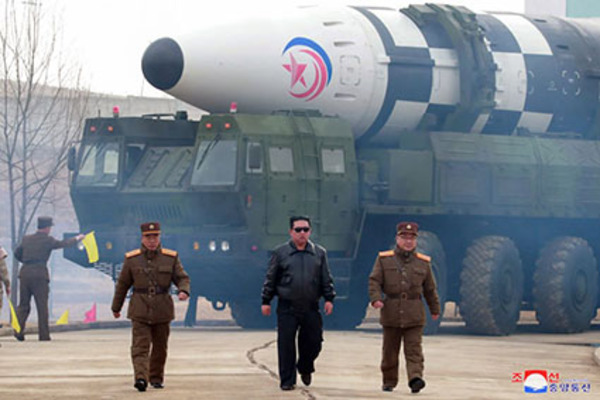 As Ukraine’s conflict churns on, most countries remain fixated on the deadly clash between the Russian invaders and heroically spirited Ukrainian defenders. This war in Europe after all has reawakened political and strategic attention along the old East/West axis.

Yet thousands of miles beyond the widening tragedy in Ukraine, a new threat has reemerged on the Korean peninsula with a provocative long-range missile test by communist North Korea.

I’m speaking of course about dictator Kim Jong-Un’s theatrically staged and successful launch of a long-range Hwasong-17 ICBM missile, which is capable of hitting the United States mainland!

Not to be out shadowed by the Ukraine war, or possibly to divert attention away from it, the North Koreans are up to their old tricks.  This year alone, the quaintly-titled Democratic People’s Republic of Korea (DPRK) has fired off salvos of short, medium and long range missiles.  The reactions beyond East Asia have been characterized mostly by ambivalence.

Recall that a mere five years ago the USA and East Asia stood on the brink of war; North Korea’s leader had variously threatened to nuke Japan, Guam, Hawaii and even the mainland USA!  Former American president Donald Trump sternly warned North Korea that any such actions would bring immediate “fire and fury” upon Kim’s regime.

Negotiations in Singapore stopped the clock with a moratorium on North Korea’s rogue missile testing but did not totally solve the wider North Korean nuclear crisis.

Since 2018 the DPRK has not fired any long-range missiles… Until now.

“This year alone, 13 ballistic missiles have been launched across 10 sets of tests, each a violation of Security Council resolutions.  We are deeply concerned by the increased tempo of these launches and the growing capability they represent,” British UN Ambassador Barbara Woodward told the Security Council.

Given the escalating situation, for the first time since 2017, the UN Security Council met to discuss the DPRK’s widening missile proliferation and testing. U.S./ UN Ambassador Linda Thomas-Greenfield warned delegates, “It’s not a regional issue. It’s an issue for all of us. The DPRK’s pursuit of weapons of mass destruction and its ballistic missile delivery systems poses a threat to every member of the global community.”

So, amid multiple global conflicts and wars, is the UN returning again to the North Korea crisis?

Yet realistically is the current showdown with the Pyongyang regime political coincidence or possibly in political connivance with North Korea’s allies, China and Russia?  In other words, is there any direct coordination between Beijing and Moscow to divert attention from Russia’s military stalemate in Ukraine?

Viewed in the wider context, Harry Kazianis, Director of Korea studies at the National Interest stated somberly, “North Korea's testing of an ICBM was an event that never had to happen.”  He added, “Had the Biden Administration decided to make the North Korea issue a priority, and not ignored the Kim regime’s build-up of nuclear weapons technology that can kill millions of people in minutes, at least some measure of progress could have been made.”

Obviously, the North Korea portfolio was put on the back burner by the incoming Biden team.

Seoul’s respected Korea Times stated editorially, “North Korea seems to have tried to make the most of the unstable international security situation following Russia's sweeping invasion of Ukraine.” The crisis has reemerged while the U.S. is focused on the Ukraine war.

There are many moving political parts here; the Biden team’s indifference to Korea has suddenly been jolted. South Korea’s newly-elected president Yoon Suk-Yeol will soon take office with a promise to be politically tougher with the Pyongyang regime, and of course North Korea’s leader Kim Jong-Un who craves the diplomatic spotlight.  Equally there’s China and Russia who see the strategic Korean Peninsula as a nexus of their own geopolitical interests in East Asia.

Despite the Ukraine crisis, events in East Asia have reasserted themselves.

John J. Metzler is a United Nations correspondent covering diplomatic and defense issues. He is the author of Divided Dynamism the Diplomacy of Separated Nations: Germany, Korea, China (2014). [See pre-2011 Archives]
kjuh17 by N/A is licensed under Video Image N/A