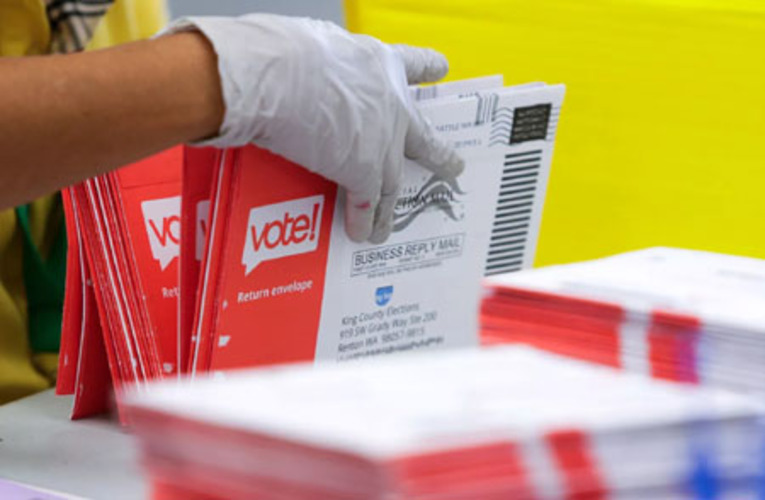 Independent media and social media investigators continue to document the widespread and often large scale irregularities that occurred in the 2020 election.

The Blaze on Nov. 30 reported on a "deep dive" analysis of the mail-in ballots counted in Pennsylvania which show voting margins favoring Democrat Joe Biden that are seemingly impossible.

It is a fact that 2.6 million mail-in ballots have been counted in the Pennsylvania election returns.

It is a fact that nearly 4.2 million votes were cast on Election Day in Pennsylvania.

It is a fact that President Donald Trump overwhelmingly won the Pennsylvania Election Day vote with 2.7 million to 1.4 million for Biden.

Given those facts, Americans are supposed to believe that Biden won 76 percent of all mail-in ballots?

"Yes, mail-ins overwhelmingly skewed Democrat, like Election Day votes skewed Republican, but they were not all from Democrats. We know that 64.7% of those votes were from registered Democrats, 23.7% from Republicans, and 11.6% from nonpartisan or other party voters," Daniel Horowitz wrote for The Blaze.

"We know those numbers alone are absurd," Horowitz wrote. "There is no way Biden won 21% of mail-in ballots from registered Republicans in this state. Exit polls showed Biden getting just 8% of the GOP vote overall. While the 95% number for Democrat mail-ins is more believable (exits showed him getting 92%), the notion that 80% of mail-ins from independents went to Biden is nearly impossible. Exit polls showed Biden winning 52% of the vote of independents overall. It would defy logic to think that there was such a qualitative gap between the type of independents who came out on Election Day and those who voted by mail."

Horowitz also pointed to a down ballot race in Pennsylvania, where Republican Stacy Garrity beat incumbent Democrat Joseph Torsella in the race for state treasurer.

Garrity won "even though she garnered 91,000 fewer votes than Trump. That in itself is not surprising, because many people don't bother to complete the down-ballot votes, so it stands to reason that the total votes cast would be lower," Horowitz noted. "What is interesting, however, is that while Trump got 170,000 more Election Day votes than Garrity, the obscure Republican running for the little-known state treasurer office got 41,000 more votes than Trump via mail-ins."

The same dynamic played out in the state auditor's race, where the Republican ultimately won the election with fewer votes than Trump, but did better than Trump in mail-ins. Trump received 105,000 more votes that Republican Timothy Defoor on Election Day, but managed to receive 65,000 fewer votes among mail-ins.

"So again, mail-in voters seem to really dislike Trump, even compared to other Republicans," Horowitz noted.

With this in mind, Horowitz then highlighted the race for attorney general in Pennsylvania, where incumbent Democrat Joshua Shapiro, who is certainly more well known than either candidate for state treasurer or auditor, won by the largest margin of any statewide election candidate.

As it turned out, Shapiro got 52,000 more votes than Biden on Election Day, but 54,000 fewer votes than Biden among mail-ins. Horowitz asked: "If people are lazy about filling out down-ballot races, wouldn't you expect to see that more among Election Day votes, as we saw with Republican candidates?"

Horowitz concluded: "Republicans who think they can just walk away from this without controversy will learn the hard way in the years to come about their inability to win against this novel form of electioneering. After all, we live in a time of 'the new normal.' "

Alabama Republican Rep. Mo Brooks confirmed that he is planning to challenge the Electoral College’s votes when Congress certifies the election on Jan. 6 during the Joint Session of Congress.

“In my judgment, if only lawful votes by eligible American citizens were cast, Donald Trump won the Electoral College by a significant margin, and Congress’s certification should reflect that,” Brooks told Politico in a report Wednesday. “This election was stolen by the socialists engaging in extraordinary voter fraud and election theft measures.”

At least one member of the House and one from the Senate has to challenge the counting of Electoral College vote to initiate a challenge.

“A lot of time is being wasted in court,” Brooks said. “The Supreme Court does not have the lawful authority to determine whether to accept or reject a state’s Electoral College submissions. Under the United States Constitution and U.S. law, that is the job and duty of elected officials … And so it’s the United States Congress that is the final judge and jury of whether to accept or reject Electoral College submissions by states, and to elect who the president and vice president of the United States might be.”

Trump’s campaign said it is preparing to file a lawsuit soon alleging that 40,000 people voted twice in Nevada, which, if true, could potentially erase Democrat presidential candidate Joe Biden’s lead.

Trump attorney Jesse R. Binnall, speaking to Fox Business Wednesday, said that the president's legal team found evidence of “real voter fraud” including “thousands and thousands of instances” that will be submitted in court.

There are “instances of 40,000-plus people who have voted twice in the election,” Binnall remarked.