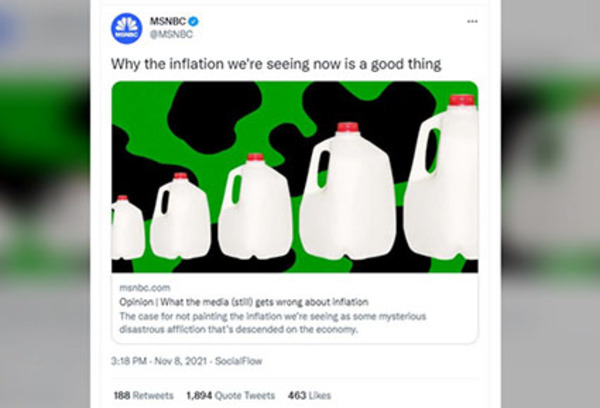 Inflation is far outpacing wage growth. The price of gas is up 50 percent over the last year. The cost of fuel oil to heat homes has risen nearly 60 percent. The price of beef is up 20 percent.

As RealClearPolitics put it, "Bidenflation" is in the news and "may be the next pandemic."

Not good. Would a Democrat administration countenance public criticism?

As if on cue, Big Media is providing context helpful to the political-cultural establishment, a club to which they belong.

CNN elaborated, explaining, "Why inflation can actually be good for everyday Americans and bad for rich people."

"You don't have to be Liz Warren or Bernie Sanders to know that is untrue," blogger Don Surber noted on Dec. 17. "The upper 1 percent have seen their net worth skyrocket. The S&P 500 is up 50 percent in the last 2 years even with the Covid crash in the stock market in February 2020."

So who wrote the memo?

News Busters reported, "Over the course of two weeks," CNN's "coverage of oil and gas prices shifted from 77 percent negative to 79 percent positive."

CNN obediently played up a 4-cent drop in gas prices while ignoring the significant increase since Joe Biden was installed.

Rachel Martin of NPR gushed over inflation: "Even though that's obviously hitting a lot of us hard, there could be a bright side here in the form of higher wages. The Conference Board, a nonprofit that conducts economic and business research, says businesses are expected to increase pay an average of 3.9 percent in the next year."

"Producer prices are up 9.6 percent in the last year. That is a solid indicator of what will happen to that raise next year," Surber noted, adding that "wages rose 4 percent in 2019 without inflation. That's your economy under President Trump — who left Biden with 1.4 percent inflation."

Paul Krugman, the New York Times economist who will never live down his 2016 Election Night prediction of a global depression and stock market crash, had trouble spinning inflation as a positive, writing: "I believe that what we’re seeing mainly reflects the inherent dislocations from the pandemic, rather than, say, excessive government spending. I also believe that inflation will subside over the course of the next year and that we shouldn’t take any drastic action. But reasonable economists disagree, and they could be right."

Surber concluded: "Raising interest rates could stop inflation, but that would send unemployment skyrocketing. I have a better idea. The government caused this. You want to end inflation? End everyone's COLAs. Make the bureaucrats suffer inflation first-hand. We will see inflation deflated in no time flat."