Moment of truth for the UN Security Council: Could the 21st century see WWIII? 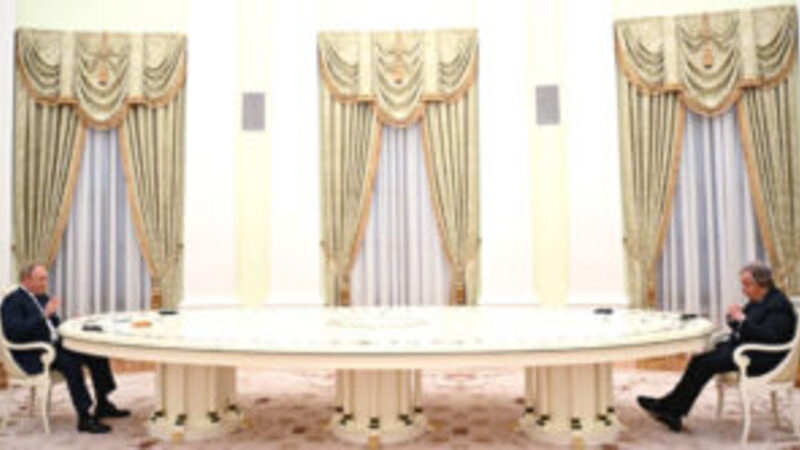 w3 by N/A is licensed under RFE/RL N/A
The secretary general was granted 'a frosty twenty-minute meeting' at the Kremlin.
Special to WorldTribune.com

Many people ask, “What’s the UN been doing to stop the Ukraine war?” That’s a fair question given that the conflict has been raging more than two months creating Europe’s most costly  conflict and humanitarian crisis since WWII.

So where is the UN or more specifically Secretary General Antonio Guterres?

Despite very active diplomacy by France, the United States and the United Kingdom in the Security Council,  with countless meetings on the situation in Ukraine, the powerful fifteen member Council still faces the Russian veto to any draft resolutions. Thus, any noteworthy Council action before and during the Ukraine conflict has been stillborn in a sense given Moscow’s capacity to block any initiatives through its veto power.

The 193-member UN General Assembly on the other hand has, as this column has regularly recorded, powerfully condemned Russia’s aggression and humanitarian actions in Ukraine on three occasions. The fact remains that a true “global majority,” to use the phrase, is stunned and sickened by Russia’s wanton aggression and they are openly saying so with tough resolutions.

Moreover, when it comes to humanitarian aid for more than four million Ukrainian refugees and millions more displaced people inside Ukraine, the alphabet soup of UN specialized agencies are carrying the overwhelming humanitarian burden; UN High Commissioner for Refugees, (UNHCR), World Food Program (WFP), and the UN Children Agency (UNICEF), to name a few. They are working in tandem with massive American, British and European Union economic assistance.

Indeed, the UN is doing what it does best; supporting humanitarian lifelines to a beleaguered land and to its fleeing refugees. Food aid has reached 2.3 million people and plans to help four million by May and six million by June.

But where’s the UN Secretary General?

While many credit Antonio Guterres with some very tough statements on the churning conflict, why hasn’t he engaged in more direct diplomacy until now?

While behind the scenes diplomacy has traditionally been the hallmark of UN mediations, the reality remains that the world organization has been increasingly marginalized before and during the Ukraine war. Too much tiptoeing and too little direct diplomatic engagement.

In a searingly poignant missive from more than 200 high ranking former UN officials and staffers who call for a proactive peace diplomatic policy initiative to counter as they consider, “The Russian invasion of Ukraine severely undermines the post-world war two global order.”

Key past officials such as the American Jeffrey Feltman, UN Undersecretary-General for political affairs 2012-2018, joined the list beseeching the Secretary General to take decisive diplomatic action.

In the past former UN secretary generals became involved in peace talks either before or during conflicts. Kofi Annan tried unsuccessfully to mediate on the eve of the Iraq war in 2003.

The group warned, “We are horrified at the alternative, the UN becoming increasingly <em>irrelevant </em>and, eventually, succumbing to the fate of its predecessor, the League of Nations.”

Thus, Antonio Guterres made his recent Mission to Moscow and Kiev.

Separated awkwardly and figuratively by a long table in the ornate Kremlin, the secretary general was given a frosty twenty-minute meeting with Vladimir Putin. Guterres pressed to open humanitarian lifelines into Mariupol.

Later, when visiting Ukraine, Guterres lamented his “sadness upon seeing the ruins” in the towns of Borodianka, Bucha and Irpin and called for a “thorough investigation.”  He added that “the war is an absurdity in the twenty-first century. The war is evil.”

He also addressed the ghastly humanitarian crisis in the battered city of Mariupol; “Mariupol is a crisis within a crisis. Thousands of civilians need life-saving assistance.  Many are elderly, in need of medical care or have limited mobility.  They need an escape route out of the apocalypse.”

Significantly, the secretary general also blamed the UN Security Council for not preventing the war, “The Security Council failed to do everything in its power to prevent and end this war. This is a source of great disappointment, frustration and anger.”

Clearly the powerful Council remains hostage to the political dictates of Moscow and Beijing.  Thus, the impasse on Ukraine and equally in Syria now for over a decade.

During a press conference with Ukraine’s besieged President Vlodomyr Zelinsky, Guterres underscored, “I want the Ukrainian people to know that the world sees you, hears you, and is in awe of your resilience and resolve.”

John J. Metzler is a United Nations correspondent covering diplomatic and defense issues. He is the author of Divided Dynamism the Diplomacy of Separated Nations: Germany, Korea, China (2014). [See pre-2011 Archives]
w3 by N/A is licensed under RFE/RL N/A