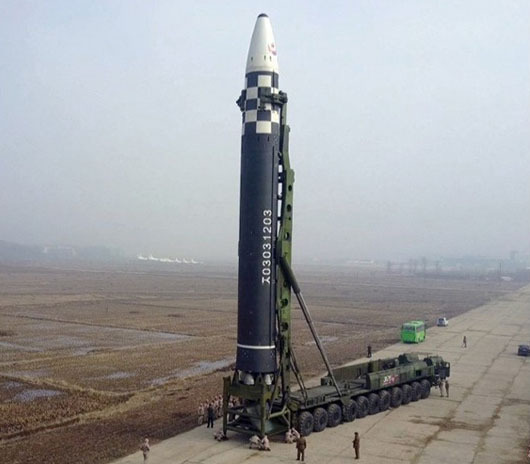 On the next day, March 25, the Wall Street Journal reported that the Biden Administration was ready to cancel two new United States theater nuclear weapons started by the Trump Administration.

First revealed in the North Korean military parade of Oct. 10, 2020, on the morning of March 24, North Korea successfully test fired its largest ICBM, that North Korean media called the Hwasongpho-17, or as it is more commonly known, the Hwasong-17.

On the same day, however, South Korean officials assessed that North Korea had instead launched a modified Hwasong-15 ICBM, which was corroborated by anonymous U.S. sources to the Washington Post on March 28.

The website “NK Pro” on March 25 assessed that the photos released by North Korea on March 24 were actually images taken during a failed test of the Hwasong-17 on March 16.

Nevertheless, the ICBM that was launched on March 24 flew a distance of 680 miles, landing within Japan’s Economic Exclusion Zone, and also flew to an altitude of 3,880 miles, a strong indication that it had a range of 9,320 miles (15,000 kilometers) as reported by the Japanese government, or more than enough to cover targets in the continental United States.

The Hwasong-17 and Hwasong-15 are powered by storable liquid fuels, meaning they can be fueled for a significant period prior to launch in order to enable a rapid emergence from its basing hanger and rapid launch for a surprise nuclear strike.

While there were not reports that the March 24 test included any test of a multiple warhead capability, developing such is a North Korean ambition. This could be a feature in future tests, which on March 25 Biden Administration National Security Advisor Jake Sullivan said was a possibility.

North Korea also took the opportunity to turn the Hwasong-17 test into a high-profile propaganda exercise, releasing a video featuring a rockstar-like North Korean dictator Kim Jong-Un strutting about in front of his missile in fighter-pilot style sunglasses and a leather jacket.