Not 'back in the USSR': Vermonters no longer harbor warm and fuzzy feelings for Moscow 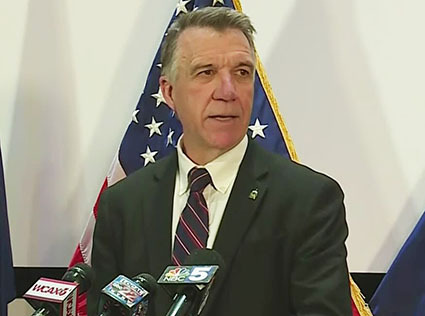 Bennington, VT — Some will smirkingly label the policy showdown as the Mouse that Roared.

But in a small but significant step to condemn the ongoing war in Ukraine, the state of Vermont has taken steps, which in the words of Gov. Phil Scott, respond to what he called “the illegal and heinous Putin invasion of Ukraine.”

The moves which amount to a series of State sanctions and rhetorical warnings come in reaction to widening popular disdain for Russia’s invasion and dismemberment of Ukraine.

Symbolically the first salvo came when Vermont State Liquor stores banned sales of Russian vodka. Though stores stock an amazing array of over 40 imported vodka brands, ranging from Iceland to Poland, the only Russian brand was “Russian Standard.” While liquor stores carry the ubiquitous Stolichnaya label, the veritable Stoli is no longer produced in Russia but in the Baltic state of Latvia.

Gov. Scott withdrew cases of Russia Standard and has subsequently interned them in local warehouses. Vermont was among the first of a dozen states, including neighboring New Hampshire, to ban Russian produced vodka sales.

Yet, Montpelier’s face-off with Moscow goes beyond vodka.

Significantly Gov. Scott established a “Solidarity Fund” for embattled Ukraine and will  donate $643,077, one dollar for each Vermonter, pending legislative approval, to humanitarian assistance in this East European land far from the Green Mountains. The bill quickly passed the state Assembly on a voice vote with no opposition.

In his executive order the Vermont Republican Gov. stated, “I know there is little Vermont, 4,500 miles away from Kyiv, can do or say to impact the horror that has been unleashed against the people of Ukraine by the regime in Moscow, but we must be ready to assist, provide humanitarian aid and stand firmly and resolutely with our Allies against this brazen attempt to weaken democracy everywhere.”

Currently Russia is Vermont’s 11th largest source of imports with nearly $16 million of rubber products imported in 2020. Russia stood at Vermont’s 35th market for its exports, accounting for $3.7 million of Vermont’s global exports of $2.6 billion.

Vermont exports to Russia largely include medical instruments. The state’s coveted Maple syrup was not listed in the mix.

Symbolically Scott called for a suspension of sister city relations between Vermont towns and Russian towns. In fact Vermont’s largest city Burlington has a long established sister city with the Russian city of Yaroslavl; The deal dates to 1988 and was set up when Bernie Sanders was Burlington’s Progressive mayor. Miro Weinberger, current Burlington’s mayor has suspended the relationship which he argued, “should not legitimize Putin’s anti-democratic actions.”

Meanwhile, the Vermont State Police announced that law enforcement agencies would be gathering bulletproof vests for shipment to embattled Ukraine; 1,000 body armor vests have been collected!

There’s a bit of virtue signaling too with blue and yellow Ukrainian flags spouting like Spring flowers in many towns and villages like Bennington and Manchester. The Bennington Battle monument, honoring the pivotal 1777 Revolutionary War battle, is bathed in the Ukrainian colors; the obelisk will be lit each evening for six weeks in Solidarity with Ukraine.

Much of this current political palaver comes with a twist of irony; Back in the 1980’s many Vermont “progressives” were in the lead criticizing the Reagan Administration’s efforts to isolate the former Soviet Union.

Many openly smirked at Reagan’s characterization of the Soviets as the “Evil Empire,” calling instead for more detente, dialogue and “balanced” discourse with Moscow. Yet during that same period noted Russian author Aleksander Solzhenitsyn lived in exile in the tiny Vermont town of Cavendish.

Now a generation later many may ask why this all matters coming from one of America’s smallest and least populous states?  Nonetheless Vermont holds political clout far in excess of its size as even many Washington insiders will readily concede.

“The bravery and resolve of the Ukrainian people is heroic and inspiring,” Scott said. Most Vermonters enthusiastically agree.

John J. Metzler is a United Nations correspondent covering diplomatic and defense issues. He is the author of Divided Dynamism the Diplomacy of Separated Nations: Germany, Korea, China (2014). [See pre-2011 Archives]
pscott by N/A is licensed under Video Image N/A