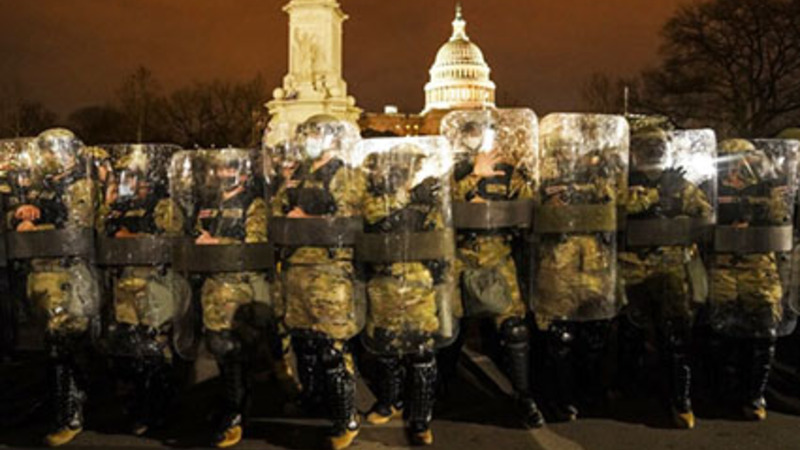 dcguard by John Minchillo is licensed under AP N/A
District of Columbia National Guard outside the Capitol on Jan. 6, 2021.
Analysis by WorldTribune Staff, November 21, 2021

President Donald Trump did not intentionally delay deployment of the National Guard to the U.S. Capitol on Jan. 6, the Pentagon’s inspector general has determined.

Democrats and their Big Media wing have long claimed that Trump ordered military leadership to hold up the National Guard for over two hours after the Capitol Police chief requested assistance.

The Pentagon IG destroys that narrative. The IG found no intentional delay in deployment of the Guard occurred and that Trump and his national security team responded reasonably to the situation and requests from the Capitol Police.

Based on the Pentagon IG’s report, The New York Times falsely reported that “Trump initially rebuffed and resisted requests to mobilize the National Guard to quell violent protests at the Capitol, according to a person with knowledge of the events.”

Unfortunately, even the Pentagon inspector general’s determination is not likely to deter the Times and other leftist outlets from relying on “a person with knowledge of events” to smear Republicans in the future.

The Pentagon IG also determined that the Department of Defense acted appropriately in its response on Jan. 6.

The IG’s investigation “determined that DoD officials did not delay or obstruct the DoD’s response to the U.S. Capitol Police’s response for assistance on January 6, 2021.”

The 153-page IG report found that decisions made by two officials on Jan. 6, acting Defense Secretary Chris Miller and Army Secretary Ryan McCarthy, “were reasonable in light of the circumstances that existed on that day and requests from D.C. officials” and the Capitol Police.

The report from the Department of Defense’s inspector general comes ahead of the Senate’s potential consideration of a Democrat proposal that would shift control of the D.C. National Guard from the president to the city’s mayor, currently Muriel Bowser. There has never been a Republican mayor of D.C.

dcguard by John Minchillo is licensed under AP N/A