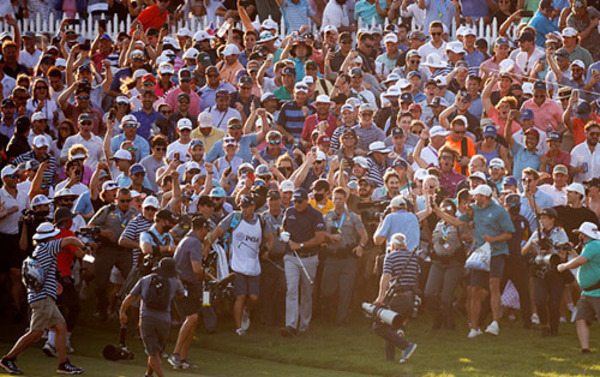 philsc by N/A is licensed under Viedo Image N/A
N/A
by WorldTribune Staff, May 24, 2021

Phil Mickelson's triumph in the PGA Championship on Sunday was a victory not only for the sport of golf but for freedom-loving Americans nationwide.

As thousands upon thousands of fans, the great majority of them not wearing masks, followed Mickelson's every move on the Ocean Course at South's Carolina's Kiawah Island, the 50-year-old's win signified the end of Covid madness, a columnist noted.

During Sunday's final round, 10,000 people jammed onto the course "with most of them compressed and following the final group of Phil Mickelson and Brooks Koepka, they looked closer to 20,000, visually," Jeff Smith wrote for Pro Golf Weekly. "They were energetic, boisterous… and mask-less."

"Even more enjoyable was observing the media prance around all masked up, thinking their theatrics would help continue the Covid frenzy," Smith wrote. "It failed spectacularly."

Smith continued: "The tyrants, who used a far-less-than-deadly virus to enact third-world authoritarian policies and edicts, now look like tinpot emperors without clothes. Imagine watching that scene unfold on TV and then saying with a straight face, 'We’re still in a pandemic. Put your mask on. Get vaccinated.' Sure. Uh-huh."

While Covid-19 is indeed real, it was the overhyping and leveraging of it for political gain that "was an absolute sham," Smtih wrote.

philsc by N/A is licensed under Viedo Image N/A