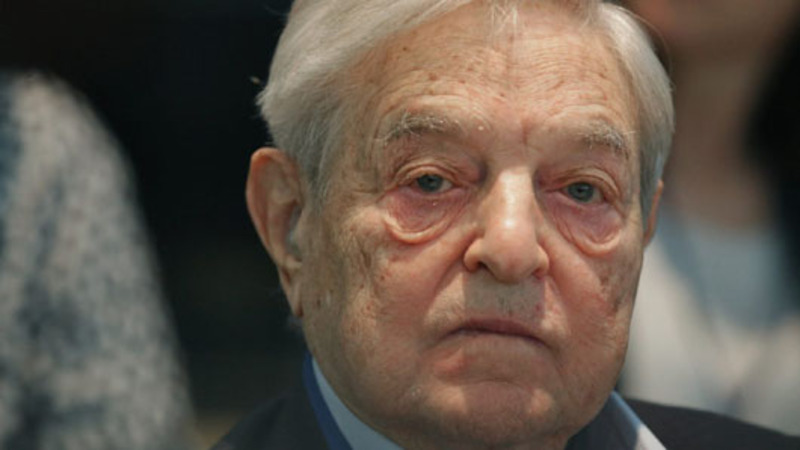 Don’t let this man into your country.

Nation-destroying progressive globalist billionaire George Soros has just put the finishing touches on another media coup in a sovereign nation that he is trying to subvert.


An investment group backed by George Soros has finalized its purchase of a stake in a leading Polish publisher. It is the third recent media deal in Poland involving the Media Development Investment Fund (MDIF), which is supported by the Hungarian-American billionaire.

The deal has seen Amsterdam-based Pluralis BV buy 40% of Gremi Media for 97 million zloty (€21.4m). Gremi’s leading title is Rzeczpospolita, Poland’s second biggest non-tabloid daily. Among its other properties is Parkiet, a business and finance newspaper.

“Plurality of news” can best be read here as “undue foreign manipulation of nations via the press”:


Pluralis was launched in November as a coalition of European media companies, foundations and investors with the aim of “supporting plurality of news across Europe”. It is controlled by a consortium of shareholders including the King Baudouin Foundation (28.46%), Mediahuis (25.39%) and the Soros Economic Development Fund (17.41%).

It is managed by MDIF, which also owns a 2.02% stake. MDIF, which is funded among others by Soros’s Open Society Foundations, has also invested in Poland’s Radio Zet and Agora. The latter owns Gazeta Wyborcza, Poland’s leading non-tabloid daily and a strong critic of the current national-conservative government.

This is precisely the type of nefarious activity El Salvador President Nayib Bukele sought to quash last year when he spearheaded a move to pass a new law taxing foreign money influencers a whopping 40 percent. Bukele has long seen Soros as a foul presence in his country. MDIF is indeed funded by OSF, as a look at its website reveals. And political activism under the guise of journalism is central to its mission:


MDIF funders and investors include a wide range of organizations and individuals who share our commitment to independent media. Their financing helps media companies in challenging environments build strong businesses that hold the powerful to account and foster economic, social and political development.

Right below this frighteningly elastic paragraph one finds the toxic logo of Soros’s Open Society Foundations. The same tired lie concentrated-wealth outside influencers resort to is dutifully uttered by MDIF. Trust us. There’s no interference in editorial policy going on, really:


Pluralis’ objective is to support plurality of news across Europe. It will invest mission-aligned capital and media expertise in independent media companies to support and strengthen investee businesses, and to help preserve the editorial independence of their news operations. Pluralis eschews any involvement with a company’s editorial decision-making.

It should be deeply alarming to Americans with eyes that can see to ponder that major U.S. media outlets today routinely trot out this stale “disclaimer” when addressing the clear conflicts of interest scandals surrounding their donors. Yet it is no secret that Soros aims to use his media purchases to directly impact the goings-on in nations that he wants to control.

The agenda is all the more clear in a country such as Poland, which has a government that commits the unpardonable sin of putting its people’s interests ahead of any global village “open society” tripe. In November, Bloomberg News Service “reported” on the Gremi Media buy in the following manner:


Soros, who has long championed democratic causes in the former communist eastern bloc, backs independent media that is coming under assault from nationalist and populist political forces.

That draws the battle lines rather clearly, does it not? A further display of Soros’s octopus-like attack on countries reluctant to travel down the path prescribed by him can be witnessed in the outrage theater performed by the NGOs and “human rights” organizations that are also financially bound to his side. An August 12 broadside against Poland by brand-name activist NGO Human Rights Watch declares:


Poland’s lower house unleashed a major threat to media pluralism on August 11, approving a bill that prevents non-European shareholders from owning a majority stake in Polish media companies. While the government has argued it needs to strengthen legislation to prevent Chinese and Russian companies from controlling Polish media outlets, the impact of the law in practice would be on independent station TVN and its 24-hour news station, TVN24. TVN’s majority stake holder is US media company Discovery.

Hundreds of journalists denounced the move as retaliation against TVN’s reporting, widely seen as critical of the government. Polish ruling coalition partners and progovernment media have repeatedly attacked and stigmatized the channel and its journalists. In July, the Broadcasting Council suspended TVN’s license, purportedly while it examined the ownership situation.

Imagine the nerve of a country not wanting its domestic media dominated by Big Money forces lurking well beyond its borders. Imagine the shock of finding out that Soros lavished a whopping $100 million grant upon Human Rights Watch in 2010:


George Soros, philanthropist and financier, today announced a challenge grant of $100 million over 10 years to Human Rights Watch. The grant from his Open Society Foundations, the largest that he has ever made to a nongovernmental organization, will be used to expand and deepen Human Rights Watch’s global presence to more effectively protect and promote human rights around the world.

Biden administration Secretary of State Antony Blinken, who has been accused of actively doing the bidding of Soros in his Cabinet-level position, also criticized the Polish media bill, saying it “targets the most watched independent news station, which is also one of the largest U.S. investments in the country.”

“A free and independent media makes our democracies stronger, the Transatlantic Alliance more resilient, and is fundamental to the bilateral relationship,” Blinken said in August, Courthouse News reported. “He warned that if the media law was passed it ‘could undermine Poland’s strong investment climate,’” CN wrote.

The bill eventually passed the nation’s legislature, only to be surprisingly vetoed by President Andrzej Duda on Dec. 27.

Meanwhile, George Soros is very much in business in Poland.

geosoros by N/A is licensed under Screen Grab N/A