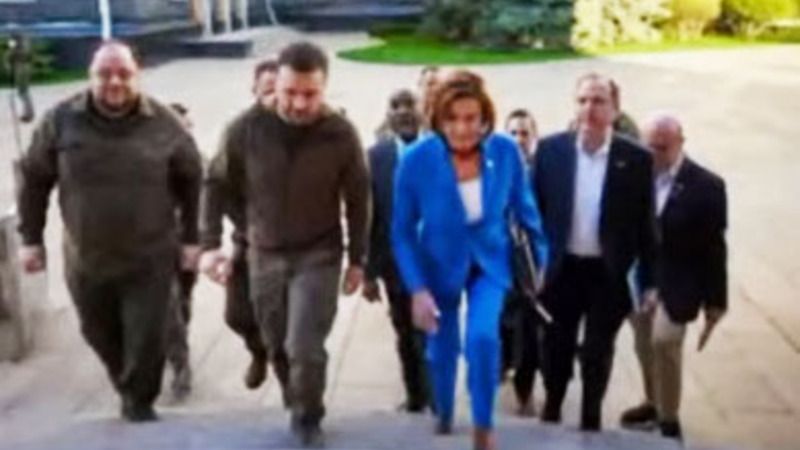 ukrnance by N/A is licensed under Video Image N/A
Nancy Pelosi and her Democrat comrades with Ukrainian President Volodymyr Zelensky in Kyiv.
Analysis by WorldTribune Staff, May 3, 2022

During a surprise visit to Kyiv last weekend, U.S. House Speaker Nancy Pelosi told Ukrainian President Volodymyr Zelensky that the United States was going to keep arming the Ukrainians "until the fight is done."

Given the condition of the mind of the occupant of the White House, has Pelosi delegated to herself the role of Prime Minister? Would either pass a cognitive test?

“We believe that we are visiting you to say thank you for your fight for freedom. We are on a frontier of freedom and your fight is a fight for everyone. Our commitment is to be there for you until the fight is done,” Pelosi said in a video posted on her Twitter account.

"How did Adam Schiff (who also made the trip to Kyiv) and Nancy Pelosi wind up being in charge of America's foreign policy as we stand on the cusp of a third World War," Fox News host Tucker Carlson asked in his Monday night broadcast.

Team Biden has already sent billions in aid and arms to Ukraine and is now proposing to send another $33 billion.

Colorado Democrat Rep. Jason Crow also jetted over to Kyiv as part of Pelosi's U.S. taxpayer-funded junket, where he said this:

"But one thing is really clear that this delegation wanted to send," and that Joe Biden "had made very clear with his most recent aid package request. It is a historic request that we're going to push hard in the United States Congress to help pass, and it sends a very simple message. We are not interested in stalemates, we are not interested in going back to the status quo. The United States of America is in this to win it. And we will stand with Ukraine until victory is won."

What Pelosi and her comrades told Zelensky is "a guarantee that should come from the mouth of the person who can make that call," TownHall.com's Matt Vespa noted. That would be Joe Biden, "not the speaker of the House of Representatives. But hey, it's a dumpster fire. No one is in charge in D.C. So, I guess Pelosi thinks she can get a little more hands-on regarding foreign policy, which is a horrifying situation."

"Pelosi made an odd declaration about our level of commitment," Vespa added. "In fact, if she were a Republican, the 'Logan Act' talking point would be dusted off to be weaponized again by the liberal media. ... Unless this was a quiet admission that Pelosi and a few other high-ranking staffers and officials do all the work since Biden's brain activity is that of a sweet potato."

ukrnance by N/A is licensed under Video Image N/A