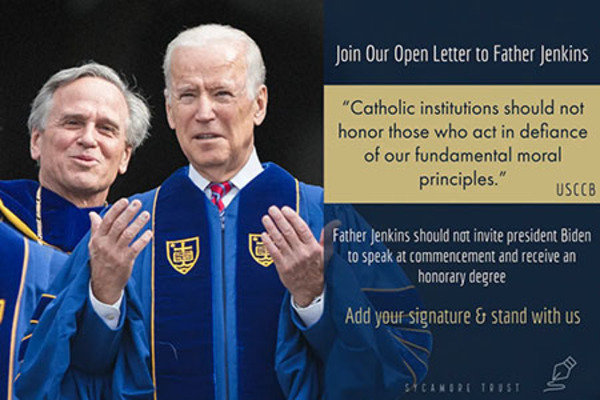 Joe Biden will not address the University of Notre Dame 2021 commencement after 4,300 staff and alumni signed a petition demanding that he not be invited due to his support for abortion on demand.

The petition said that Biden should not speak at the commencement and should not be given an honorary degree, because those who signed are "dismayed" by Biden's "pro-abortion and anti-religious liberty agenda."

Related: Archbishop: Biden needs to ‘stop defining himself as a devout Catholic’, February 21, 2021

The White House claims that Biden will not be attending the Notre Dame commencement due to a “scheduling conflict.”

Finance executive and trustee of the university Jimmy Dunne will be addressing the graduates instead.

The petition notes that Biden, who claims to be Catholic, "rejects Church teachings on abortion, marriage, sex and gender and is hostile to religious liberty. He embraces the most pro-abortion and anti-religious liberty public policy program in history. The case against honoring him is immeasurably stronger than it was against honoring President Obama, an action that alienated countless Catholics and brought upon Notre Dame the harsh criticism of 83 cardinals, archbishops and bishops."

The petition concluded: "Notre Dame has long prided itself on its preeminent position in the educational world of the Church. We suggest that its responsibility as such is to guard Church teachings that are crucially important in today’s society by conferring its honors upon those who support them rather than upon those who oppose them, especially the one person above all who has the will and the power to undermine them."

ndjoe by N/A is licensed under Screen Grab N/A