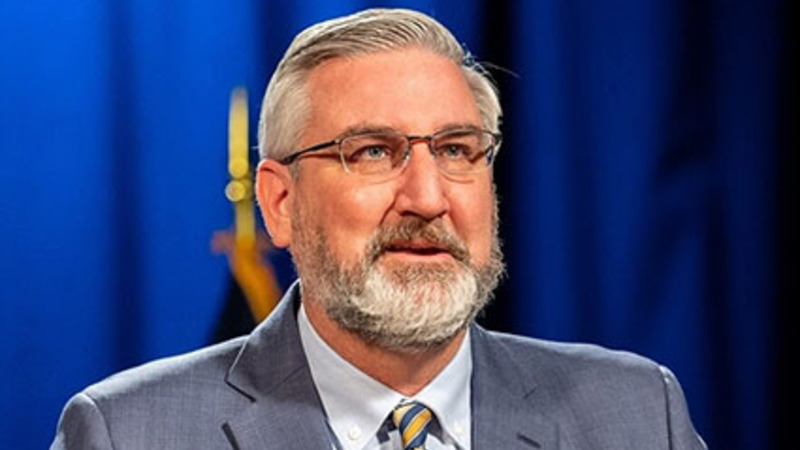 Last month, Indiana Republican Gov. Eric Holcomb and the head of the Indiana National Guard met with Slovakia’s minister of defense and with its top general.

The U.S. Embassy in Slovakia tweeted that the meeting was held to talk about “expanding” military cooperation between Slovakia and Indiana.

"Why would Indiana be involved with any military operation in Slovakia?" independent journalist Margaret Menge asked in a Substack report.

What it does have, however, is the Indiana National Guard and, Menge noted, "what some people want more of in Eastern Europe, lined up near the Russian and Ukrainian borders — American troops. A lot of them."

Slovakia, a NATO country, shares a border in its east with Ukraine. Menge noted that, prior to Russia’s "invasion" of Ukraine, "a poll showed most people in Slovakia thought the United States was to blame for the problems between Ukraine and Russia."

On Feb. 9, Slovakia’s parliament approved a defense cooperation agreement which allowed the United States to expand its military presence in Slovakia.

In mid-March, Slovakia's parliament approved the deployment of up to 2,100 NATO troops in the country, including troops from the United States, as part of a NATO "enhanced forward presence."

Late last month, NATO leaders made the decision to expand the alliance's military presence in the east, increasing the number of troops in countries including Slovakia, Romania, Bulgaria and Hungary.

"What’s concerning is that the expansion of NATO eastward, and the potential admission of Ukraine into NATO, is at the heart of the current troubles, as Russian President Vladimir Putin has repeatedly said that one condition of ending the war in Ukraine is a guarantee that Ukraine — most of which was part of Russia from the 1400s until Ukraine was declared an independent country in 1991 — would never become a member of NATO," Menge wrote.

Does Team Biden want the war in Ukraine to continue?

"Yes, certainly, because it makes it that much easier to go after Russia and to sell it as a 'defense of Ukraine,' " Menge wrote. "And people who’ve studied U.S. policy towards Russia have concluded that what the United States really wants is to 'break Russia.' (These two words — 'break Russia' — were used by former Secretary of State Henry Kissinger to sum up the 1992 doctrine written by neocon warmonger Paul Wolfowitz — a doctrine that has remained in effect and poisoned American foreign policy for two decades — including in Ukraine.)"

So what is Indiana doing in Slovakia?

We were delighted to host #Indiana @GovHolcomb and his delegation in #Slovakia. Governor Holcomb met with PM @eduardheger , Foreign Minister @IvanKorcok , and Defense Minister @JaroNad to discuss expanding our long and steady military and economic cooperation. #StrongerTogether pic.twitter.com/Hqoaq8HTYG

"Conveniently, the Indiana National Guard has a 25-year partnership with Slovakia that has involved joint military training exercises," Menge noted. "Who are we training them to fight?"

In 2019, a Guardsman wrote an article describing one of those joint training exercises, held at a military training center in Lest, Slovakia, in an old Soviet-era barracks. In the exercises, soldiers went from room-to-room to train how to fight in an urban warfare scenario.

The goal, the Guardsman wrote in the article on the National Guard’s website, was “reinforcing old and learning new war-fighting skills alongside Slovak allies to be a more lethal and effective unit.”

Menge noted: "Whatever is being planned for the troops with the Indiana National Guard — whether it’s an invasion of Moscow or moving in to Ukraine to fight Russians from Kiev, Holcomb seems to be fully on board."

In an interview with the Northwest Indiana Times, Holcomb "seemed to support the overthrow of Russian President Vladimir Putin," Menge wrote.

Holcomb said in the interview: “I think the sooner he leaves the international stage the better for humanity, and if he wants to put his people first he would do just that.”

Holcomb also told Fox59 in an interview that he thinks Russia should be declared a state sponsor of terrorism.

In early March, in talking of his call for the state to divest itself of all Russian-related companies and funds, Holcomb said the state of Indiana “is not going to be part of Putin’s blood-oil machine.”

In mid-March, Menge asked the Indiana National Guard to explain what its mission is in Slovakia and what military or humanitarian support the Guard is now providing to Slovakia.

A spokesperson for the Indiana National Guard responded: "Through our State Partnership Program, the Indiana National Guard has a long history of training with and supporting the Slovakian military. Indiana Guardsmen frequently travel to Slovakia for a wide variety of combined training exercises. Maj. Gen. Lyles visits our partner nations to strengthen these relationships."

The spokesperson for the Guard, Lt. Col. Randi Bougere, responded: "Overall, these visits are common. We visit Slovakia and our other partner nation of Niger, several times throughout the year."

Menge noted: "But now we have the new information from the U.S. Embassy about an expansion of military cooperation, and about our governor and head of the Indiana National Guard meeting with the Slovakian defense minister and Slovakia’s top general. Certainly, they weren’t meeting to talk about the weather!"

holcom by N/A is licensed under Video Image N/A